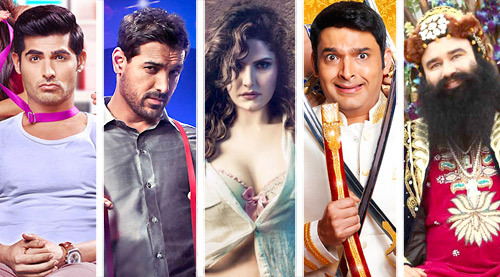 No big starsâ€¦ No promises of high-end entertainment. How did these films become money makers of 2015?


1. Pyaar Ka Punchnaama 2: Luv Ranjan's follow-up to his 2011 sleeper hit again succeeded without the prop of stars. Ranjan used relatively new but talented actors to address that age-old question: what do women want? Surprisingly even women loved this seemingly misogynist film with no Khans in the lead. The script was clearly the rock star of the show.


2. Welcome Back: Anees Bazmi's bizarre comedy of errors followed his pattern of storytelling. Actors bustling in and out the frames in groups and hordes pretending to be deaf/ mute/ blind/ dumbâ€¦did this film make any sense to anybody? The film raked it in. The moolah, I mean. Not the favourable reviews.


3. Hate Story 3: Sleazy cheesy corny and outrageously imbecilic this purportedly 'sexy' film with 4 non-happening actors in the lead became a box office success. The producers proudly proclaimed this to be the most hated hit. Heated or hated?


4. Kiss Kisko Pyar Karoon: Kapil Sharma's movie debut was a baffling ode to polyandry with Kapil married to three women living on the three different floors of the same building, plus a girlfriend who blessedly didn't live in the same building. The film was so politically incorrect and so regressive you wondered how Kapil forgot the first role of stardom. Success comes with responsibility. But who cared? The producers laughed all the way to the bank.