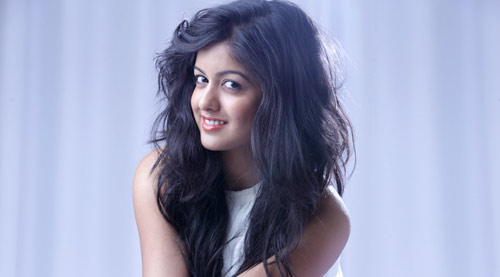 Ishita Dutta is not new to the world of films. The petite beauty has actually enjoyed a foray down South in a few films and is now stepping into the world of Bollywood. Enacting the part of Ajay Devgn's teenage daughter in Drishyam, Ishita, younger sister of Tanushree Dutta, is actually in her early 20s. Pleased to pass off as a 16 something girl, and boasting of a good screen presence, Ishita has managed to deliver a good impression in her very first outing where she is actually the reason for all the drama that takes place in Drishyam. Happy with the response that she is getting for the Nishikant Kamat film, Ishita gets talking.

Good to see yet another youngster stepping into the world of films.

Yeah, I am very excited. I was waiting for something good and for me, Drishyam is a perfect break. To be working with Viacom, Ajay, Tabu and Nishikant is superb. Of course, initially, I was very nervous, but then when you get a team like this, half your worries are taken care of.

Since the film actually gets into action due to your character, I am sure you would have just lapped up this performance oriented part, right?

Yes, that was one of the main reasons. I was so excited when I came to know that this would be a remake of Malayalam film Drishyam. A lot of my friends from South had seen the film and they were so thrilled that I was chosen for it. In fact, they were happier than me (laughs). Even though I am not playing a quintessential heroine part per se, the character is so strong and present in so many scenes, that I can show people how I can perform. Moreover, sharing screen space with Ajay and Tabu is learning in itself.

Did you watch the original Drishyam though?

No. I just got a brief that this would be a family entertainer and I would have a strong part to play. In fact, I was specifically told not to watch the original till my Hindi version releases. That was so that I don't get influenced. See, I am a new actor and I have heard a lot about all the girls who have played my part before. The makers wanted to see my version. So, now, I am really eager to catch hold of the original.

You did not have any apprehension playing a teenager even though you are in your early 20s?

(Laughs) I think I am very lucky to be playing a teenager. Which girl won't like to enact someone younger than her age?

So how did you go about bringing in the right combination of someone innocent and vulnerable who has to be protected?

To be honest, I wasn't very sure about it when I gave audition. One thing that I did was to completely de-glam myself for the part. So, I would be seen wearing simple clothes throughout so that common audience can relate to me. Since I am playing a small town school going girl, I had to be in that mode. I don't know how good or bad I have done, but then, I trust my director a lot. Since he is happy with my work, I guess I must have pulled it off. Also, performing with Ajay sir helps since he gives you so much support. I was a little skeptical to begin with but then it was all fun after all.

The film requires a controlled performance where emotional quotient has to be perfect on screen. That must have been a major challenge, right?

Yes, but, I did not do any preparation at all. As a matter of fact, even if I had wanted to, I couldn't have done that since it all happened so fast. First few days were so overwhelming. Just to meet Ajay sir was an emotional experience. As for my character, I didn't delve much. Since I am from Jamshedpur, I tried to remember how I was in school. As I started getting my scenes, I got into my character and it was all sorted a couple of weeks down the line. In fact, for first few days, I got the scenes which did not require a lot of performance to begin with. I got into flow as more scenes came.

Since you were a teenager till a few years back, were you able to relive the insecurities that come along with the age?

Yes, that's right. As a matter of fact, things that happen in small towns affect you more. Out there, you may not really have much confidence to say something in open. On the contrary, you are much stronger living in a city. In a small town, you can't go out after a certain time. In Mumbai, I felt a huge difference. You hear of so many incidents from the past; well, I have lived that life.