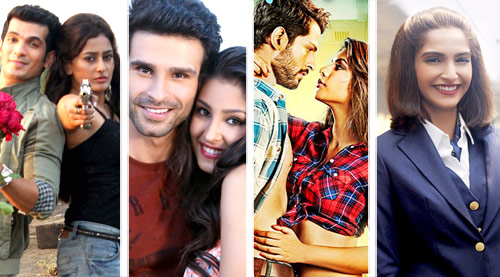 The box office this week threatens to groan and collapse with the weight of a multitude of releases.


There are 4 films lined up for this Friday. Among them, 3 have a distinctly Valentine hangover-so could they have got the release date wrong by a week?


Director Rajiv Ruia's Direct Ishq has Rajniesh Duggal and Nidhi Subbaiah in the lead. Both the actors have been around for nearly. Hardly the kind of star attraction that would have audiences flocking for more.


Wait, it gets worse.


Debutant director Vaibhav Mishra's LoveShhuda brings back the Tips Music scion Girish Taurani last seen in his home production Ramaiyya Vastavaiya, this time with a former beauty queen Navneet Kaur Dhillon. The first time he had the beauteous Shruti Haasan for company. Didn't help much. But then if you are a scion from a film empire you get to try and try until you ...don't succeed.


Another debutant director Sameer Sippy braves the crowded turnstile this week with Ishq Forever which has newcomer Krishna Chaturvedi with semi-newcomer Ruhi Singh. She was one of Madhur Bhandarkar's Calendar Girls last year, and the best of the 5 calendar girls in the film. This isn't saying much. But then this week, barring one film, we are desperately looking for silver linings.


All 3 films mentioned above are expected to sink without a trace, leaving the coast clear for director Ram Madhvani's real-life drama Neerja about the exceptionally doughty airhostess Neerja Bhanot, played unusually by Sonam Kapoor, who saved hundreds of lives during a hijack. The plot has drama and a poignant mother-daughter sub-plot where Shabana Azmi gives her best shot to playing the braveheart's bereaved mother.


Neerja is in the safe zone. Trade experts feel, its high-velocity emotional strength will see it through.


Says Atul Mohan, "I hope the crowded week doesn't turn out to be a weak one. Neerja is flying high with supportive tweets and mentions by industry friends."

GOT7 make triumphant return to their roots…