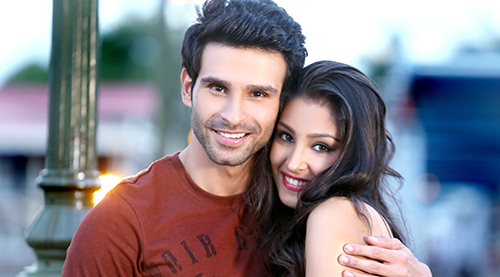 The time has arrived. Exactly 50 days into 2016, Bollywood would finally have its freshest 'jodi' on the big screen. Though there are a couple of romantic films already in the running, audience has been craving for a romantic pairing that sizzles the screen with its looks, youth and charm. Well, the wait would finally be over with the arrival of Girish Kumar and Navneet Dhillon on the big screen.

What makes this further special is the fact that their film together, Loveshhuda, releases today, i.e. February 19 and that marks the 50th day of the New Year. Moreover, its timing couldn't have been better as the release is just a few days after Valentine's Day, what with love being in the air.

Tell Girish about this and he shyly admits, "It is always so good when people want to know more about you and mention how they are looking forward to the 'jodi'. ClichÃ©d as it may sound but the fact remains that a 'jodi' can't be half as charming if not for the moments that are created for them to be brought on screen. This is what our director Vaibhav envisioned and Navneet and I complied."

Well, the (pleasant) shocker was there right at the beginning when the characters played by Girish and Navneet were introduced as a couple whose love story started on a bed. This pretty much established that an unusual love story for a very good looking couple was all set to unfold.

Smiles Navneet, "A lot of my friends have complimented me that as a young couple, we both are really looking good. Of course, I would always like myself on screen but then when others - especially the ones who are not from the industry -tell you that, it really feels good."

Meanwhile, Vaibhav ensured that there was good groundwork in place so that Girish and Navneet had good camaraderie in play before heading for the shoot.

"Since Girish and Navneet hadn't met before, I organized workshops and reading sessions for them. Loveshhuda is a love story and a crackling chemistry between the lead pair was the need of the hour. So while the fact that they are so young and good looking helped, rest was taken care by the understanding that they developed as a couple in love. From this point on, it was a cakewalk," says Vaibhav.