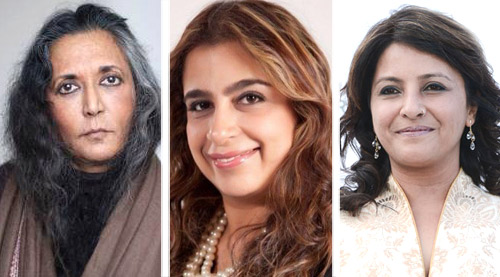 The self-styled noire specialist of Bollywood Randeep Hooda was hoping to crack the international market with Deepa Mehta's Beeba Boys. But the early review from the Toronto Film Festival, which opened this week, indicate a cold response to the film.

A source from the Festival informs, "The international press persons find Hooda to have too much attitude. A Canadian journalist told me that he spoke to George Clooney just before Hooda and found the former far more humble down-to-earth and connectible."

On the other hand, Tannishtha Chatterjee who stars in Leena Yadav's Parched (produced by Ajay Devgn) the other Indie highlight at the Toronto Film Festival which was screened this week, has been bathed in encomium by the Western press after the film's premiere screening at the Festival.

Speaking from Toronto right after the screening on Saturday night Tannishtha said, "I am floored by the reviews and the response ... Finally women are finding their voices as filmmakers. I just
came from Venice where my film Island City also directed by a woman, Ruchika Oberoi won the best debut prize ... It's a big thing. And I have a very quiet and powerful role in the film. Now to be reading such fab reviews about Parched and also about my performance ... It's again Leena Yadav a woman director writing tales about contemporary women whose lives are controlled by the patriarchal system."

One of the first reviews from Toronto compares Beeba Boys to Deepa Mehta's fiasco Bollywood/Hollywood and the disastrous Godfather 3, the third and doomed part of the Godfather saga. The Toronto critic writes, "The subtle creator of Water has gone missing in action." Another reviewer from Toronto writes, "One has to admire Mehta for dipping her
toes in unfamiliar waters (the gangster genre). The director is trying something new, but unfortunately fails to successfully maneuver the genre."

On the other hand Parched gets the prestigious Variety's approval, "Thanks to attentive writing and sturdy performances, the director's characters are so compellingly realized that it's easy to succumb to the film's hopefulness

Up next at the Toronto Film Festival is Meghna Gulzar's much-discussed Talvar, entitled Guilty in the international market. The film recreates the events of the infamous Aarushi
Talwar murder case. Meghna hopes to cash in on Irrfan Khan's global reach to get western audiences attracted to her murder mystery.