“Distributors started the trend of having shows at 2 am with Karan Arjun,” said producer-director Rakesh Roshan to this writer in an exclusive chat for Bollywood Hungama. He then elaborated how he couldn’t believe when viewers all over the country assembled to see his film a little past midnight, an unheard-of phenomenon. He explained, “On the day of the release, I got a call from a distributor in Madhya Pradesh, at 3 am in the morning. He informed that he has opened the film at 2 am in the morning and that it’s a houseful show. I thought that he’s out of his mind or that he was dreaming. I was like, “2 baje kaun show rakhta hai. Ullu bana rahe ho aap”. But he insisted that he’s not lying and made me listen to the reaction of the audiences. Then other distributors also told me that they have already started showing the film and that 2 am, 6 am and 9 am shows all were sold out!” 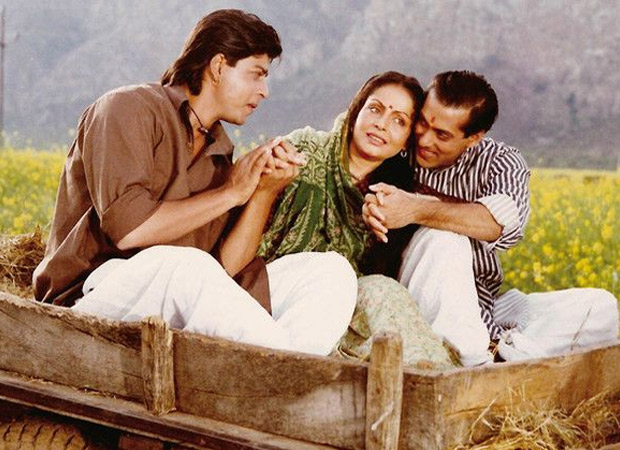 Karan Arjun was always a ‘garam’ film for trade and even filmgoers. After all, it was directed by Rakesh Roshan, who knew the pulse of the audience. It was peppered with hit music, novel storyline, masala entertainment and most importantly – the presence of two then upcoming superstars, Shah Rukh Khan and Salman Khan. Yet, nobody was ready what happened exactly 25 years from now, the day the film opened, on January 13, 1995. Bollywood Hungama in this feature brings to you some rare trivia about the craze generated by the film at the box office

1. It often happens that the cold wave is blamed for films not earning the desired earnings. But in case of Karan Arjun, the excitement was so huge that viewers just didn’t care about the freezing cold. East, West, North, South – Karan Arjun was running houseful everywhere. Jaipur in Rajasthan can get acutely cold in the mornings. Yet, the morning 6 am show at Paras cinema in this Rajasthan capital was sold out!

2. In Muzzafarpur, Bihar, the crowd became unruly, especially those who came to watch Karan Arjun on the day of release but couldn’t get tickets. They went into such frenzy that the theatre owners decided to cancel the 6:00 pm and 9:00 pm shows of the film.

3. In Hyderabad meanwhile, no show got cancelled but looking at the surging crowd, cops were called in at Ramakrishna 70mm theatre. The unbelievable demand for tickets prompted the theatre management to commence the advance booking of the second week on the day of the release itself. Usually, the next week’s plan opens on Monday. Believe it or not, the second week got sold out in no time! Not just that, the advance of the first day was opened in this theatre on Monday January 9 and saw a record collection of Rs. 90,000!

4. In Aurangabad and many other places, crazy filmgoers queued up outside cinema and were out of control. Similar scenes were seen in numerous cities across the country.

5. The craze extended in other countries as well. In Houston, USA, Karan Arjun got a release in as many as 4 theatres and all of them were sold out. This was noticed by Houston Radio who decided to cover this event release and have a telephonic chat with Rakesh Roshan on January 14th night.

6. However, in Dubai, the film didn’t work, if a section of trade is to believed. The reason according to them: the role of Johny Lever was totally cut from the prints screened in this Middle Eastern city. Even the crucial scenes of the temple were edited out. As a result, audiences couldn’t connect with the film and hence, it didn’t get the appreciation that it deserved. When asked, Rakesh Roshan denied that the film suffered any such cuts in Dubai.

Also Read: 25 Years Of Karan Arjun EXCLUSIVE: “Shah Rukh came back to me when he found out that Salman and Aamir Khan have shown interest” – Rakesh Roshan