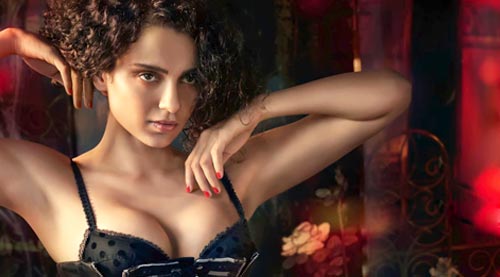 1. Kangna has played the maximum biographical characters: Monika Bedi in her debut film Gangster, Parveen Babi in Woh Lamhe, Madhubala in Once Upon A Time In Mumbaai, Geetanjali Nagpal and now Meena Kumari in Tigmanshu Dhulia's bio-pic.


2. After her arrival from Himachal Pradesh, Kangna was hosted in Mumbai by Aditya Pancholi. She even stayed in a flat owned by the Pancholis.


3. Was apparently spotted by Anurag Basu at a coffee shop to be signed for Gangster, though, this version of her beginning in Bollywood has been challenged by many.


4. After Aditya Pancholi, it was Shekhar Suman's son that Kangna was closely associated with. There was also a mysterious British boyfriend whom no one had seen. Currently, said to be seeing an un-married superstar.


5. Kangna Ranaut was to make her debut in a film entitled I Love You Boss, produced by Pahlaj Nihlani and directed by Deepak Shivdasani. The film never got made.


6. Was mentored by Anurag Basu initially. She was so close to his family that she would spend hours in Basu's house during her days of struggle. Ranaut had a fall-out with Basu over the length of her role in his Kites. They are no longer on talking terms.


7. Before Queen, undoubtedly the piece de resistance of her career, Kangna's career hit rock-bottom with duds like Tezz, Rascals and Rajjo.


8. Wore a bikini for the first time in Rascals. Refused to publicize the film. Bikini body was fine. But she didn't like the way her role had shaped up.


9. 'R' is clearly not a lucky letter for Kangna. Rascals, Rajjo, Revolver Rani are some of her biggest fiascos.


10. Queen re-wrote the course of Kangna's career. She won all the major popular awards for her performance. But, refused to collect the awards as she does not respect the popular awards. We respect her unflinchingly honest opinion on life and art. Please don't change, Ms Ranaut. Happy Birthday.

Kangana Ranaut turns architect for her…

‘Bhai’ Ho To Aisa: Salman Khan is a habitual…