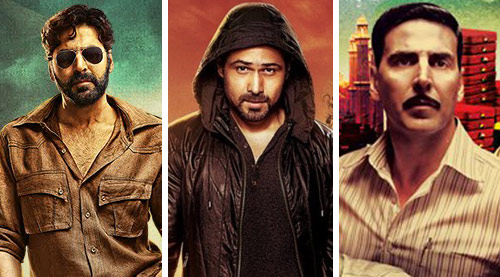 Akshay Kumar's Gabbar act in Gabbar Is Back is one of the many self-appointed social cleaners we've seen Bollywood. A look at the Top 10 vigilantes on screen.


1. Amitabh Bachchan in Shahenshah: The Big B played up the dual-personality theme as a cowardly cop and a super-hero who sets out on a course of instant justice. Great fun, with the right proportions of the comic book and newspaper headlines.


2. Kamal Haasan in Hindustani: Director Shankar's story of a 70-year old veteran freedom fighter who decides to eliminate corrupt bureaucrats, just like Akshay Kumar in Gabbar Is Back.


3. Anil Kapoor in Nayak: Chief Minister for one day, Anil Kapoor decides to teach the slothful corrupt bureaucracy and the resident CM Amrish Puri a lesson. This was the ultimate fantasy-fulfillment film.


5. Amitabh Bachchan in Sarkar: He ran a parallel government in Ram Gopal Varma's film. When the law failed there was alwaysâ€¦.Sarkar! No prizes for guessing which Maharashtrian leader the Big B's character was based on.


6. Jaane Bhi Do Yaaron: When two bumbling photographers Naseeruddin Shah and Ravi Baswani stumble upon monstrous irregularities in the construction business they are forced to get embroiled in Operation Clean Up.


7. Aparichit: In this Shankar-directed Blockbuster by night actor Vikram turned into a vigilante who terrorizes corrupt government officials. No Indian film on the crusader-hero's mission to eradicate corruption was as successful as this.


8. Lage Raho Munnabhai: Gandhi-giri during times of unmitigated dadagiri? Turning the other cheek never got cheekier.


9. Special 26: Gabbar Is Back is not the first film where Akshay played the Social Cleanser. In Neeraj Pandey's Special 26, he was part of a fake CBI team that raided corrupt officials.


10. Gabbar Is Back: Akshay takes on the corrupt social order once again. With love.