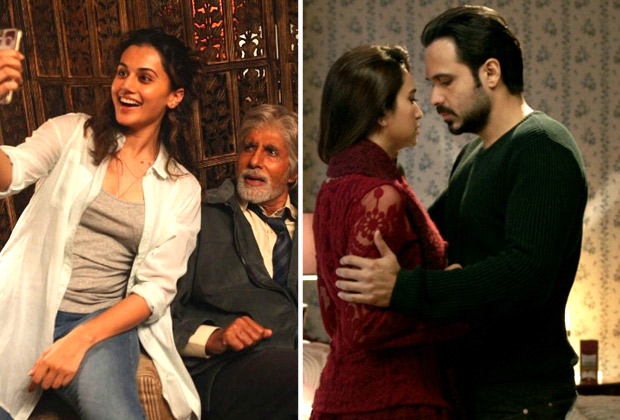 Pink is already a Hit and it could well be heading for a Superhit status now. The manner in which the film had collected right through the weekdays, it was no surprise when Rs. 3.15 crore more collected on the second Friday. With no real competition whatsoever and exhibitors continuing to screen, Pink, at almost the same volume as the week gone by, the Shoojit Sircar produced film was always going to have numbers similar to that of the day before.

The film has now netted Rs. 39.06 crore and a weekend of around Rs. 14 crore is pretty much on the cards. That would mean that the Rs. 50 crore mark would certainly be surpassed by the film in 10 days flat. That would be a wonderful feat for the Amitabh Bachchan, Taapsee Pannu, Kirti Kulhari and Andrea Tariang starrer. Once that happens, the film would have already gone past Amitabh Bachchan's Wazir [Rs. 41 crore] and equalled Ki & Ka [Rs. 51 crore]. The next target for the film is Mohenjo Daro [Rs. 58.5 crore] and then Udta Punjab [Rs. 60 crore], both of which would be surpassed comfortably.

Meanwhile, Raaz Reboot has crashed and would be out of theatres after its two week run. The film could bring in just around Rs.75 lakhs* on its second Friday and the collections stand at Rs. 27.5 crore*. The film would just about hit the Rs.29 crore mark over the weekend and then ends its lifetime run around Rs. 30 crore. Frankly, last film in a successful franchise like Raaz definitely deserved a better farewell. Perhaps, this could just be the cue for the makers [Bhatts] to kick-start new franchises from this point on as their Murder 3 hadn't done well either while Jannat 2 couldn't really outshine Jannat.