With a title like Veere Di Wedding, it is quite apparent that the soundtrack would be full of life and celebrations galore with a good deal of Punjabi element added to it. Multiple composers, lyricists and singers come on board for this Kareena Kapoor Khan and Sonam Kapoor starrer that is expected to be a fun entertainer in the offering. 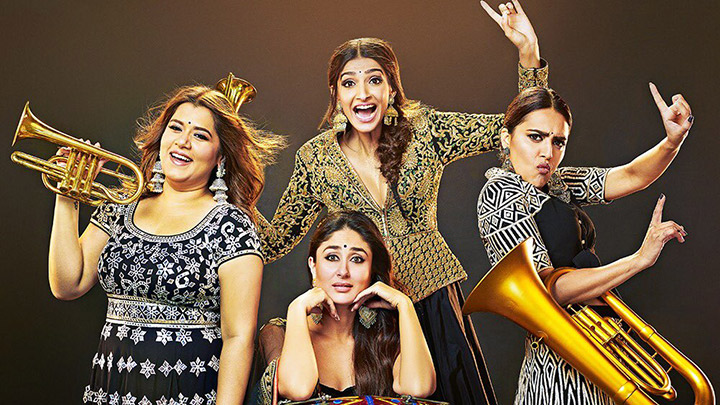 Composer Shashwat Sachdev gets maximum songs to his credit in Veere Di Wedding and he kick-starts the proceedings with 'Pappi Le Loon'. He steps in as a singer too for the song that has Sunidhi Chauhan leading the show. A fun fast paced number that is written by Shellee, 'Pappi Le Loon' is just the right song to arrive at the beginning of the album. One waits to see how this is picturised as it is a hit in the making.

Traditional number 'Bhangra Ta Sajda' is given a contemporary twist with the theme of 'No One Gives A Damn!' Yet another track by Shashwat Sachdev, this Punjabi track is written by Gaurav Solanki. A foot tapping number, it has a team of Neha Kakkar, Romy, Surya Ragunaathan and Shashwat Sachdev coming together and adding on to the fun. Expect this one to find its way into celebrations up north.

White Noise is credit for the music and lyrics of 'Laaj Sharam'. Portions of this song are already being heard in the promo and one has to credit Jasleen Royal for taking a different route in this naughty number. With a mix of Western and Punjabi feel to it, what with Divya Kumar joining in as well along with rapper Enbee, 'Laaj Sharam' could well be a riot on screen if aided by some good picturisation.

A song which gives an impression of a road trip number in the offering, Anvita Dutt written 'Veere' is composed by Vishal Mishra. While he gets himself behind the mike, he is also supported by a huge team of Aditi Singh Sharma, Iulia Vantur, Dhvani Bhanushali, Nikita Ahuja, Payal Dev & Sharvi Yadav. Expect the song to be picturised on each of the four actresses as they get high on life and engage in playfulness.

Meanwhile, Shashwat Sachdev plays the triple role of a composer, lyricist and singer with 'Bass Gira De Raja'. One can't really fathom how it would eventually turn out on screen because as a standalone number it doesn't really make you root for it so as to play it in a repeat mode. Yes, there are few Western musical portions in between that catch your attention a bit though as a song in itself it doesn't really do much.

Shashwat Sachdev continues to make his presence felt in the album as he comes up with 'Aa Jao Na'. He pairs up with Arijit Singh for this slow moving love song that is written by Raj Shekhar. A strictly situational number that could well appear towards the middle of the film's second half, such songs always risk slowing down the narrative and hence one waits to see how it eventually fits in.

Composer Vishal Mishra and lyricist Anvita Dutt return on the scene with 'Dagmag Dagmag'. A Punjabi number, this one aims at being an upbeat fun affair. However the eventual outcome is just about okay and it all boils down to the core hook which may end up making some sort of impression. Vishal leads the show as a singer along with Payal Dev.

Last to arrive is 'Tareefaan' which is actually the first song to have been promoted for Veere Di Wedding. Composed and written by Qaran (with Rupin Pahwa and Badshah stepping in too as the lyricists), 'Tareefaan' is yet another Badshah rendered number that is set to be a good musical success. This one makes an impression right from beginning till the end as it is not just the hook factor but also the entire package that works. A hit track.

What works for the music of Veere Di Wedding is the consistency of sound despite multiple artists involved in putting in together. Though not each and every song is a hit in the making, none of it at least makes you look the other way. Moreover, the presence of at least three hits in the making is reassuring indeed.