One of the greatest chapters in world movie history has to be the Marvel Cinematic Universe (MCU). After introducing various exciting superheroes and also the ultimate villain (Thanos), the series went on another level in AVENERS: INFINITY WAR [2018] and later in AVENGERS: ENDGAME [2019]. The latter ended on a somewhat tragic note owing to the demise of Iron Man primarily. However, MCU saga continues and one of the first post-ENDGAME films that have hit theatres is SPIDER-MAN: FAR FROM HOME. So does it manage to entertain and excite audiences? Or after the events of AVENGERS: ENDGAME, it doesn’t live up to the expectations. Let’s analyse. 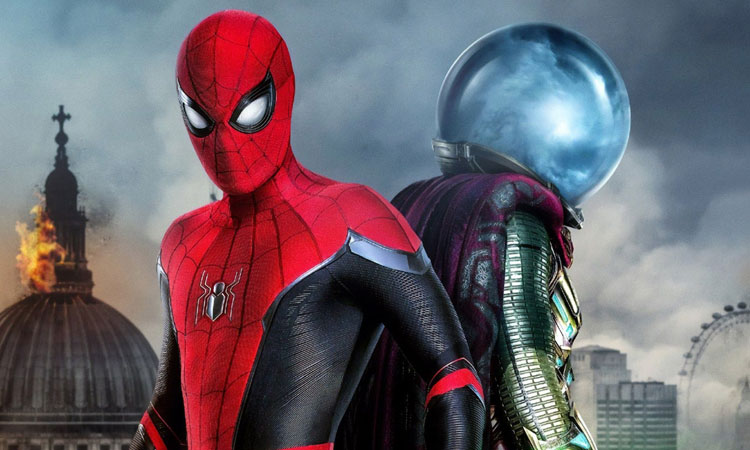 SPIDER-MAN: FAR FROM HOME is the story of a superhero torn between his love and responsibilities whilst fighting a nasty villain. The world is slowly adjusting after half of the population disappeared and then re-emerged five years later (called the ‘blip’). Peter Parker aka Spider-Man (Tom Holland) is still distraught by the demise of Tony Stark aka Iron Man (Robert Downey Jr). He doesn’t want to be a superhero for a change and is looking forward to a two-week summer field trip to Europe organized by his alma mater, Midtown School of Science and Technology. That MJ (Zendaya) is also a part of it makes him even more excited. He plans to propose to her on top of the Eiffel Tower, Paris during the trip. Meanwhile, Nick Fury (Samuel L Jackson) and Maria Hill (Cobie Smulders) reach Mexico where locals complain that the cyclone, that destroyed their village, ‘had a face’. While investigating, the Earth Elemental resurfaces. At this point, Quentin Beck aka Mysterio (Jake Gyllenhaal) also emerges and destroys the creature. Realizing that Spider-Man can prove to be of help, Nick calls Peter and even sends Happy Hogan (Jon Favreau) to him. But Peter ignores the call for plea and heads to Venice for the trip. While he and his school mates are enjoying the sights, the Water Elemental wreaks havoc. Mysterio reaches on time and he destroys it and Peter also helps him. Nick Fury meanwhile reaches Venice as well and tells Peter that the Fire Elemental will be attacking next, in Prague. Mysterio, who is revealed to be from another Earth, says that it is the most dangerous of all and that it destroyed his planet. Nick hence insists that Peter help them. He also gifts Peter Tony’s glasses, equipped with the artificial intelligence, EDITH, meant for the latter’s successor. Peter is touched with the gesture but he rejects to help and looks forward to moving to Paris next where he will be finally proposing to MJ. However, Nick gets the school trip’s itinerary changed to Prague instead of Paris! Hence, Peter reluctantly is compelled to help in fighting Fire Elemental. As expected, the fire creature attacks and with great difficulty, Mysterio, along with Peter’s help manages to destroy it. Peter realizes he doesn’t deserve the EDITH glasses and hands it to Mysterio. All seems to be well but here’s when things change for the worse. Peter realizes he has done a grave mistake and what happens next forms the rest of the film.

Chris McKenna and Erik Sommers's story is impressive and is in sync with the theme and mood of the earlier SPIDER-MAN film, SPIDER-MAN: HOMECOMING [2017]. Chris McKenna and Erik Sommers's screenplay does justice to the plot and adds a lot to the film. There’s a lot happening in the movie, especially in the personal life of Peter, and this aspect especially is well woven with the hero vs villain track. Dialogues are as expected witty and up the humour quotient.

Jon Watts's direction is commendable and he takes the film to great heights. After having more than 20 MCU films and showing countless number of evil creatures vandalizing various cities, it is a challenge to show all of that and yet impress the audience. And Jon wins the battle here, though in the first hour, it doesn’t entirely impress. But later on, with some twists in the tale, the desired impact is made. He also directed SPIDER-MAN: HOMECOMING and hence, recreates the mood and even some of the aspects. The intro scene, after the Marvel logo is shown, for instance is done in the same way as the earlier film. But he also brings a contrast by making Peter run away from superhero responsibilities whereas in SPIDER-MAN: HOMECOMING, he is dying for the next mission. Lastly, he also touches upon the Iron Man tribute but makes sure he doesn’t go overboard. On the flipside, the twist in the villain track is a shocker but could have been more convincing. It’s bewildering that the antagonist managed to pull off what he did without any suspicion.

SPIDER-MAN: FAR FROM HOME’s beginning scene, showing the Mexico sequence is ordinary. The fun begins once the narrative shifts to New York City and viewers get acquainted with the ‘Blip’ concept. With AVENGERS: ENDGAME fresh in mind also Peter’s association with Tony, it seems very convincing when he declines to help Nick. His chemistry with MJ is electrifying and not just action, but this film scores in this department as well. The scenes where Water and Fire Elementals destroys Venice and Prague makes for a good watch, although it’s something that we have seen in previous Marvel films too. But it’s how Spider-Man and Mysterio team up is what makes it novel. Till here, the film is fine but it goes on a high once the true intentions of Mysterio are unveiled. And this really takes the film on a high because the events that follow are novel, especially the villain’s powers and methods. The finale in London is very exciting. The mid-credit scene is shocking and makes you wait for the next Marvel films with even more excitement. The post-credit scene is a surprise, though it raises questions as well. 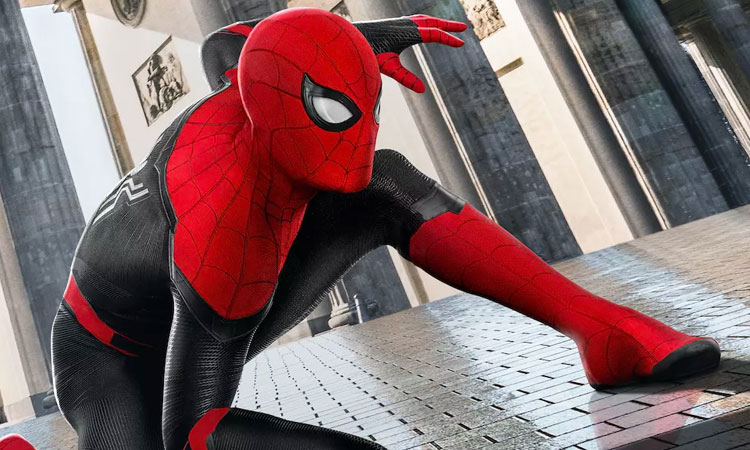 Tom Holland is now fully acceptable in this role. This time, Peter has become a bit matured although his goofy side is still intact. Tom balances this act very well. As Spider-Man too, he is just apt. His best act however is when he’s trying to woo MJ. Jake Gyllenhaal is quite impressive in this interesting role and he gets better in the second half. That evil laugh, when he reveals his true colours, is one of the memorable moments in the film! Zendaya is terrific and she does complete justice to her character. The way she rattles off trivia about various places and shows her dark side of humour makes her even more fascinating. Jon Favreau is dependable as always and this time, his character pisses off Peter and you have to see the film to understand why! Marisa Tomei (Aunt May) is a stunner as expected and is decent. Samuel L Jackson in his element. Jacob Batalon (Ned) is quite funny and even his character comes across a significant change and it adds to the entertainment. Tony Revolori (Eugene) is fine as the bully and there’s a hint given as to how he’s going to contribute a lot to future Marvel films. Other actors who are nice are Cobie Smulders (Maria Hill), Angourie Rice (Betty), J B Smoove (Professor Julius Dell), Martin Starr (Mr Harrington) and Numan Acar (Dimitri). The late Stan Lee unfortunately is not present in his trademark cameo appearance.

Michael Giacchino's music is energizing for such a superhero film. Matthew J Lloyd's cinematography is breath-taking and the various cities are well captured. The sequence set in the tulip fields of The Netherlands however stands out. Claude Paré's production design is up to the mark. Anna B. Sheppard's costumes are appealing. VFX as expected is top class and in the illusion scene, it is very impactful. Leigh Folsom Boyd and Dan Lebental's editing is sans complaint. But in a crucial twist scene, it is too quick and takes a while to comprehend.

On the whole, SPIDER-MAN: FAR FROM HOME is a fun, entertaining fare that gives viewers their money’s worth. With AVENGERS: ENDGAME fresh in everyone’s minds, it further adds to the impact. Spider-Man has been immensely popular in India and hence at the box office, SPIDER-MAN: FAR FROM HOME is expected to rake in huge numbers and possibly emerge as the biggest non-AVENGERS Marvel flick. Recommended!