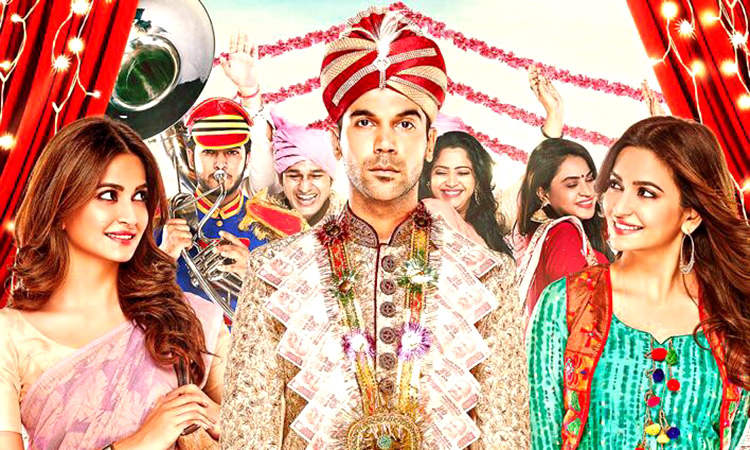 It’s a time when rooted stories based in small towns and the ‘real’ India is working big time. This year, films like SHUBH MANGAL SAAVDHAN and BAREILLY KI BARFI did very well and one of the reasons for their success is the realism rooted in their narratives. SHAADI MEIN ZAROOR AANA is also a content-driven rooted film that also balances by telling a love story as well as a dramatic, confrontational tale. So does it manage to entertain or fails to entice viewers? Let’s analyse.

SHAADI MEIN ZAROOR AANA is the story of a guy who avenges the humiliation he faced during his wedding day. Satyendra Mishra aka Sattu (Rajkummar Rao) is based in Lucknow and is about to join the excise department. His family decides to arrange his marriage with Aarti Shukla (Kriti Kharbanda). Aarti is a bit confused as she feels that marriage might come in the way of her ambitions. But she gels very well with Sattu who in turn falls for her. On the day of the marriage, Aarti's sister Abha (Nayani Dixit) learns that Sattu's mother won’t allow Aarti to work. On the other hand, the results of the PCS exam attempted by Aarti are out and she passes it successfully. Abha advises that she should run away from the marriage and excel professionally. Or else her in laws will destroy her life just like how Abha’s in laws destroyed Abha’s life. Aarti hence runs away. Sattu gets devastated. Five years later, Aarti becomes a sub registrar in Lucknow. One day suddenly she is accused of bribery to the tune of Rs 3 crores. The officer who investigates this case is none other than Sattu, who has now become deputy magistrate! He decides to take revenge from Aarti and make her pay for the humiliation he and his family faced five years ago. What happens next forms the rest of the film.

SHAADI MEIN ZAROOR AANA's first half has issues but you let it pass as the goings on has genuinely some nice moments. The manner in which Sattu and Aarti fall for each other is cute. The entire dowry portion is well thought of. The dramatic sequence when Aarti runs away is dragging but makes for a decent watch. The second half also begins well but soon enough, the film goes downhill. One fails to understand how exactly do the makers want to present Sattu? Should the viewers sympathize with him for all the wrongdoings? Or should they hate him for the villainous and even lecherous way with which he tortures Aarti? The entire bribery investigation sequence ends on a dramatic note and one expects the film to end there. But the film drags for another 20-25 minutes. This portion is again needlessly lengthened and is highly predictable.

Kamal Pandey’s story is interesting but comes too late in the day. Maybe it is not intentionally done but the first half is very similar to the first hour of BADRINATH KI DULHANIA and the last 20 minutes are eerily similar to BAREILLY KI BARFI, which also starred Rajkummar Rao. Kamal Pandey’s screenplay is fine at few places but overall it’s quite a letdown. Kamal Pandey’s dialogues are simple and decent.

Ratnaa Sinha’s direction doesn’t make the desired impact. The film is unconvincing and silly at many points. Many scenes go on and on despite the fact that it’s clear what the maker wants to show in the beginning of the said scene itself.

Rajkummar Rao as always delivers a great performance. As the lover boy Sattu, he’s endearing and as the ruthless DM, he's dashing and plays both the avatars brilliantly. Kriti Kharbanda does a much better job here than her previous Hindi releases. However her character keeps crying in the second half and after a point, it becomes too much. Govind Namdev (Aarti’s father) is fair. Vipin Sharma (Sattu's maternal uncle) leaves a mark. Manoj Pahwa (Aarti’s uncle Jogi) is the best out of the supporting cast. Nayani Dixit comes next and dominates the pre interval portion. K K Raina (Sattu’s father Jugal Kishore Mishra) underplays his part nicely. Navni Parihar (Aarti’s mother) and the actors playing Aarti’s brother, Sattu’s mother, Sharad, Aarti’s junior and Pramod are fine.

Songs are disappointing. 'Jogi' and ‘Main Hoon Saath Tere' are forgettable. 'Tu Banja Gali Benaras Ki’ is the best song of the lot. ‘Pallo Latke' is played in the end credits. Prasad Sashte’s background score is dramatic and tries to enhance the impact.

Suresh Beesaveni’s cinematography is satisfactory. Ballu Saluja’s editing is one of the biggest culprits. Pradip Singh and Arup Adhikari’s art direction is nothing great.

On the whole, SHAADI MEIN ZAROOR AANA rests on an interesting idea but the treatment is lacklustre. With lack of buzz, the film will have a tough time at the box office.

Exceptional movie with some good twists and turns