Today almost every film that hits screens comes along with loads of visual effects and CGI that promise to leave the viewer spell bound. Well, this week, we see the release of one such film, PACIFIC RIM: UPRISING, which heavily relies on visual effects to not just take the story forward but also to give the viewer a complete cinematic experience on a larger than life canvas. The film is a sequel to 2013 release PACIFIC RIM that created quite an impact with its massive mech warriors going head to head with alien life forms that threaten to destroy earth as we know it. But will it manage to live up to the expectations that have been created by the first, or will it buckle under the pressure, is what we analyse. 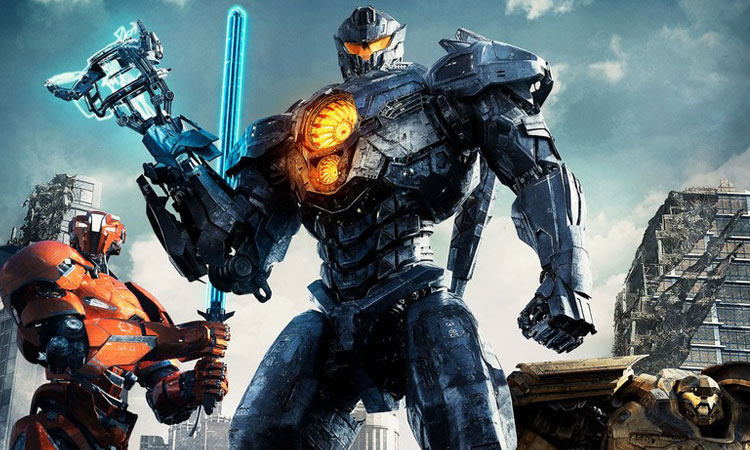 PACIFIC RIM: UPRISING is set 10 years after the epic ‘Battle of the Breach’ which acted as the climax of the 2013 release. With a brief recap of what transpired in the first film, the sequel dives head first into telling a new tale on epic proportions. With the cataclysmic events behind, the surviving human race has moved on with life. However, there is still a division prepping in the wings just in case another such event happens. But with the advancement in technology, we see the rise of new breed of automated Yeagers that can be remotely piloted. Things seem to be progressing idyllically in the global neighbourhood when out of the blue; a rogue Yeager lays waste to the city of Sydney. Jake Pentecost (John Boyega) a once-promising Jaeger pilot whose legendary father gave his life to secure humanity's victory against the monstrous Kaiju assisted by pilot Lambert (Scott Eastwood) must defend what is left. Stunned by this sudden attack, Pentecost and Lambert undertake a mission to investigate a base buried in ice. Here they are waylaid once again by the rogue Yeager. But the duo piloting Gypsy Avenger, manage to overpower it and haul it back to base. Back home, they learn that the rogue Yeager has been developed after cloning a secondary Kaiju brain. However, the battle is far from over with multiple such rogue Yeagers appearing opening up a new rift for the Kaiju to pass through. Will the battered and bruised team of motley Yeager pilots be able to defend Earth, is what forms the rest of the film.

Right from the onset PACIFIC RIM: UPRISING directed by debutante feature film director Steven S DeKnight is a visual treat. With a throwback to the previous film, this one too gives viewers a feel of watching something larger than life unfold. The film does feature some of the best mecha warrior action with well-choreographed fight sequences, wanton destruction, thrilling after-effects and of course some touching dramatic sequences. However, the film does not feature anything new in the overall scheme of the story. In fact, like the first film, PACIFIC RIM: UPRISING still toes the line of an alien species invading earth aiming to cause an extinction level event, being fought off bravely by a rag tag team of defenders ultimately saving the world from certain destruction. While the first half of the film starts off well laying the foundations for a thrilling second half, the on screen progressions do not really connect with the seasoned viewer. On the other hand though, the film does come across as one that is aimed more at catering to kids/ teenagers who would love the dollops of destruction and action on offer. Progressing further, the second half of the film doesn’t get any much better. Though replete with nail biting action sequences, unlike the first film, PACIFIC RIM: UPRISING does not manage to develop a similar kind of awe in the viewer. Instead the film comes across as a valiant effort to live upto the cracker of a movie Guillermo del Toro gave us in 2013.

Coming to the performances in PACIFIC RIM: UPRISING, John Boyega as Jake Pentecost does well in his given role, however, the burden of living up to his father Stacker Pentecost’s image played by Idris Elba seems to be too much. Though Boyega does a decent job, his enactment of an inspiring speech session to mimic that of Elba’s from the first film falls flat. Scott Eastwood as Nate Lambert, Cailee Spaeny as Amara Namani, Burn Gorman as Dr. Hermann Gottlieb and Charlie Day as Dr. Newton 'Newt' Geiszler do similarly well in their given roles. However, it is the visual effects of the film that are truly its main lead. Unlike the first film, that features a slightly darker theme, PACIFIC RIM: UPRISING is surprisingly light both in terms of theme and overall doomsday proclamations. Sadly, though the film is a fun watch, it does not compete with Del Toro’s ode to the monster films of old.

Coming to background score, something that has become rather major when telling a large canvas story, is severely lacking in the film. With no memorable scores that help build the tension and overall weight of the on screen happenings, the viewer feels rather disconnected.

On the whole, PACIFIC RIM: UPRISING, though not as good as the first part, does manage to hold its own. If you enjoy the thrill of watching giant mecha robots go head to head with monstrous aliens, this film is certainly meant for you. At the Indian box office, with a bit of competition coming in from the Bollywood release HICHKI, PACIFIC RIM: UPRISING that enjoys a wide release across four languages, looks set to register decent numbers.