Back in 1997 we saw the sci-fi film MEN IN BLACK hit screens starring Tommy Lee Jones and Will Smith. The film, about an undercover government organization that secretly protects the Earth from alien life was an instant hit among the masses. Following the success of this, there were two other sequels that released, with the last one releasing in 2012. Now, six years on, we see a new film in the series with MEN IN BLACK: INTERNATIONAL. But will this new film which features a new cast, comprising of Liam Neeson, and the THOR: RAGNAROCK pair of Chris Hemsworth and Tessa Thompson manage to live up to the past films in the series or will it fall flat and be classified as just another CGI filled fest is the question. 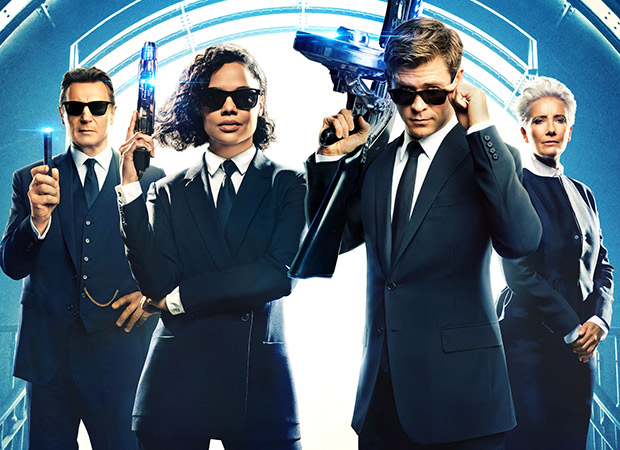 The film starts off after the events of MEN IN BLACK 3, with a new branch of the MIB being set up in London. From here the film skips to a scene in a local neighbourhood in America where a young girl Molly (Tessa Thompson) sees her parents get nuralized, but escapes the same herself, while at the same time assisting an alien lifeform to escape. Years pass, and Molly persistently searches for the mysterious organization of individuals who wear only black suits. Meanwhile back in London, the head of the branch, High T (Liam Neeson), pairs her up with Agent H (Chris Hemsworth) to battle a different alien species called The Hive. The battle is won and both Agent T and Agent H are hailed as heroes. Back in America, Molly finally finds the headquarters of MIB and convinces Agent O (Emma Thompson) to recruit her. Put on a probationary period, Agent O sends Molly now rechristened to Agent M on a mission to London where she meets Agent T and Agent H. Though on probation Agent M wriggles her way onto a mission with Agent H, a mission where they need to keep an alien noble safe. Unfortunately things take a turn for the worse, and the two must now figure out what went wrong, who leaked the information of the alien noble being on Earth. And most importantly they have to tackle their biggest threat to date: a mole in the Men in Black organization.

Right from the word go, viewers are taken on a journey where everything is possible, from wormhole travel to high speed undersea trains. With excellent CGI, the film is visually stunning keeping you in your seat. However, the first half of the film is spent in setting up the premise for the story while at the same time introducing the new characters. Though Agent T and Agent H aren’t given much in the way of a backstory, Agent M, on the other hand, has her life played out from the moment she first encountered the Men in Black. Sadly this process comes across as long drawn and if not for the visuals and occasional action sequences, viewers would be hard pressed to stay in their seats. The second half of the film picks up with all the ends coming together, a clearer picture begins to emerge. However, as the story progresses one can’t help but notice how predictable the flow is. In fact, the entire core of the film can easily be surmised by the end of the first half with the eventual outcome also being spot on.

In this regard, the writing of the film certainly could have been better; with a rather predictable approach and lacklustre punch lines in the dialogues, a lot is missed. In fact, when compared to the previous film, MEN IN BLACK: INTERNATIONAL comes across as a half baked attempt to take the franchise forward. The writers Art Marcum and Matt Holloway could have paid more attention to the comic aspect of the film, which unfortunately works only in parts, while for the remainder of the time it comes across as forced and unwanted. Marcum and Holloway have also tried to imbibe Agent T and Agent M with the same kind of relationship that was shared by Tommy Lee Jones and Will Smith in the previous film. However, once again the writing falls flat with the two coming across as disinterested and unconcerned for the other. Director F Gary Gray does what he can with the script and dialogues, weaving a visually stunning film. Unfortunately, this does little to help the film.

Coming to the performances, Chris Hemsworth who was last seen as the bloated Thor in AVENGERS: ENDGAME is back in shape and on the ball as far as his performance is concerned. Sadly, we have seen his comic side and know he could do better but was limited by the script in this one. Given this fact, Hemsworth has done a commendable job of trying to carry the film. Tessa Thompson, as Molly/ Agent M has done a decent job in her role and so has Liam Neeson as High T. However, though each of the artists have given it their all putting their best forward, the underwhelming story and the weak writing severely undermine their acts.

As for CGI and visual effects, MEN IN BLACK: INTERNATIONAL has it all. From big explosions to unimaginable alien lifeforms, the film features everything. But once again, visuals alone do not make a film, making this latest in the franchise just another CGI filled venture. Even the background score of the film is rather forgettable, unlike the previous films whose tunes are still there in the back of your mind, MEN IN BLACK: INTERNATIONAL features an uninteresting and uninteresting soundtrack.

On the whole, for those of you who have loved the MEN IN BLACK series this new release will be a serious downer. At the box office, with BHARAT running strong and competition from other new releases, MEN IN BLACK: INTERNATIONAL will face a tough time ahead.