A sub-genre developed in Hollywood in recent times is that of superhero black comedy. DEADPOOL [2016] and KICK-ASS [2010] are fine examples of it and have been loved across the world. In India we have lagged considerably here. Forget superhero black comedy, even films with dark humour are seldom made probably since such films lack mainstream appeal. But now director Vasan Bala has taken up the challenge and the result is MARD KO DARD NAHI HOTA. The protagonist is not a superhero here although his condition does make him a force to reckon with. With such an interesting idea, does MARD KO DARD NAHI HOTA manage to work and give an entertaining time to the viewers? Or does it fail in its endeavour? Let's analyse. 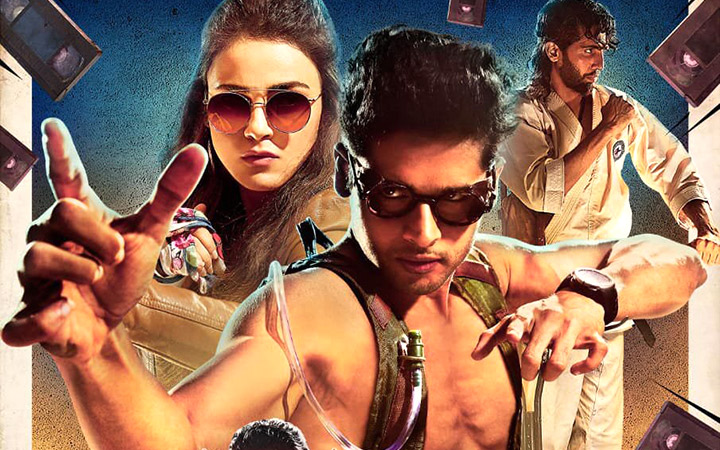 MARD KO DARD NAHI HOTA is the story of a young chap with an extraordinary ability. Surya (Abhimanyu Dassani) is born with a rare defect called congenital insensitivity to pain. In simpler words, he can’t feel pain at all. This lets him go wild as a child and even get injured multiple times, since he doesn’t realise when he has broken a bone or requires medical intervention. His father Jatin (Jimit Trivedi) is therefore very cautious about him. Having lost his wife and Surya’s mother (Shweta Basu Prasad) days after Surya is born, his father is hence even more concerned. But Surya’s maternal grandfather (Mahesh Manjrekar) who also stays with the two is more open and adopts an unconventional method of parenting. In school, Surya gets bullied because of his condition and the only one who comes to his rescue is Supri (Radhika Madan). She however has an abusive father and she’s helpless in front of him. Surya feels obliged to help her and while doing so, he ends up pushing her father from the terrace of a three-four storeyed building. The father thankfully survives but Surya and his family are compelled to leave their residence and shift elsewhere. Here, Surya grows in a controlled environment under the strict watch of Jatin. He’s allowed to go out only once. In the present-day, Surya is around 21 years of age. Jatin is in love with a woman named Nandini and he wants Surya and the maternal grandfather to meet her at her residence. Both hence venture out. But in a funny misunderstanding, the grandfather is taken away by the cops and gets separated by the Surya. Surya meanwhile bumps into Supri, who has now grown up as a badass girl. He sees her posting publicity posters of Karate Mani (Gulshan Devaiah), who Surya has idolized since he was a kid. Surya decides to meet Karate Mani immediately and also Supri. However, once he reaches the karate centre, he’s shocked to see the place ransacked and Karate Mani injured. This is when he learns that Karate Mani needs help as he’s being tortured by his evil twin brother, Jimmy (Gulshan Devaiah). What happens next forms the rest of the film.

Vasan Bala's basic plot is novel and unlike anything viewers have seen in Bollywood. However, the plot on the whole is quite waferthin. It’s a bit unconvincing to see that Surya and others are simply retrieving a gold locket stolen by Jimmy and nothing else. Vasan Bala's screenplay however tries to add some creative and entertaining moments to keep the interest going. Vasan Bala's dialogues are quite sharp and funny. Supri's remarks on Rumi are sure to bring the house down.

Vasan Bala's direction is top notch despite some rough edges. The treatment is quite unique and that makes the film engaging to a great extent. The manner in which he has executed some sequences and Surya’s manner of thinking are also quite fun. The use of pop culture references further add to the charm. If only the film had a solid and convincing storyline, MARD KO DARD NAHI HOTA would have been in another level.

MARD KO DARD NAHI HOTA begins on a fun note. The childhood portions are interesting but get stretched a bit. Memorable sequences here that stand out are Surya pushing down Supri’s father and Jatin confessing to Surya’s maternal grandmother that he loves Nandini. The latter is hilarious and would surely be loved. However, the first half is only used for build-up and establishing characters. It’s only in the second half that the film really gets interesting as Karate Mani’s characters gets defined properly and also Jimmy is introduced in the narrative. The fight in the security office is entertaining and even the finale is fun. However, the fight sequences are quite dragging. The film also doesn’t end on a justified note, especially what happens with Karate Mani. The makers do drop a hint about a possible sequel though.

Abhimanyu Dassani makes an extremely confident debut and impresses with his histrionics. Radhika Madan, last seen in PATAAKHA [2018], gets to play a ‘pataakha’ yet again. She has a fine screen presence and adds to the film's entertainment quotient. Special mention should also go to her action scenes. Gulshan Devaiah is the surprise of the film. His double role act is superb especially the part of the antagonist. He induces the maximum laughs in the film. Mahesh Manjrekar is also at his best and after a long time, he gave such a memorable performance in a Hindi film! Jimit Trivedi, who impressed in 102 NOT OUT, also adds to the fun. Shweta Basu Prasad leaves a mark in a cameo. The actors playing the young Surya and Supri are quite something. The actors playing Nandini, Atul, Supri’s mother and the old, moralistic security officer do well.

Karan Kulkarni's music won’t become a chartbuster but is utilized well in the film. 'Rappan Rappi Rap' is like a theme of the film. 'Life Mein Fair Chance Kiska' has a nostalgic vibe, with the singer crooning in the style of S P Balasubrahmanyam. 'Tere Liye' is touching. 'Nakhrewaali' is well shot. 'Dreamtime' comes at a crucial juncture while 'Kitthon Da Tu Superstar' and 'Shaolin Sky' don’t make the desired impact. The background score however is in good sync with the film.

Jay I Patel's cinematography is neat. Eric Jacobus and Anand Shetty's action is one of the highpoints of the film. It’s very well-choreographed and would be loved. A few shots do get a bit gory though. Prateek Parmar, the martial art consultant, also deserves praise for his services. Ratheesh U K's production design is realistic. Abhilasha Sharma's costumes are glamorous, especially the ones worn by Radhika. Prerna Saigal's editing could have been tighter. The 137 minute long film ought to have been at least 10 minutes shorter.

On the whole, MARD KO DARD NAHI HOTA rests on an interesting idea and is well directed and performed. At the box office, it will need to depend on a strong word of mouth to post decent numbers at the ticket windows.