Last Updated 01.12.2021 | 11:30 AM IST
feedback language
follow us on
Bollywood Hungama » Movies » Movie Reviews » Jumanji: Welcome to The Jungle (English) Movie Review: Jumanji - Welcome to the Jungle makes for a roller coaster adventure with good humour. Definitely worth a watch.

Movie Review: Jumanji Welcome to the Jungle makes for a roller coaster adventure with good humour. Definitely worth a watch. 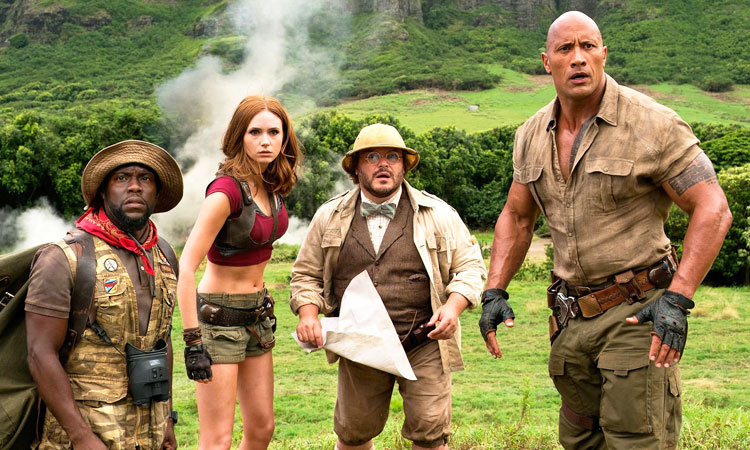 Back in 1995, we saw the release of the Robin Williams film JUMANJI. The film which was an adaptation of the 1981 children's book of the same name by Chris Van Allsburg went on to become somewhat of a classic with fans across the world. Now decades later, we see the release of a standalone sequel of the film that features Dwayne Johnson, Jack Black, Kevin Hart, Karen Gillan, Nick Jonas and Bobby Cannavale. But will the new age film live up to expectations or will it, like so many other recreations, be a washout is the question.

Titled JUMANJI: WELCOME TO THE JUNGLE, the film follows four high school kids who after being sent to detention, discover an old video game console and are drawn into the game's jungle setting, literally becoming the adult avatars they chose. Once in the game, the four discover that you don't just play Jumanji - you must survive it. To beat the game and return to the real world, they'll have to go on the most dangerous adventure of their lives, discover what Alan Parrish left 20 years ago, and change the way they think about themselves - or they'll be stuck in the game forever, to be played by others without break.

First off, being a standalone sequel to the 1995 film JUMANJI: WELCOME TO THE JUNGLE sees a paradigm shift in how the game is played. Unlike the previous film that featured a board game, the new version of the film sees the game being adapted to suit gaming sensibilities of 1996 with Jumanji now featuring as a console based game. But it isn’t just the mode of playing that has changed. In fact, along with it, so have the visuals and story line evolved incorporating new age filmmaking and storytelling abilities. This massive change from the previous film gives JUMANJI: WELCOME TO THE JUNGLE plenty of space to work within to provide viewers with a celluloid adventure in the heart of the jungle. Though at first, audiences who have watched the Robin Williams film will be sceptical, the makers of the new film have done a great job in developing a sequel of sorts, while at the same time not affecting the original.

However, given the fact that the film resides firmly within the genre of action, adventure and comedy a sore thought that pops to mind is that most of the gags and comic elements might be disclosed in the trailers, leaving next to nothing new in the final film. But in the case of JUMANJI: WELCOME TO THE JUNGLE, it comes as a surprise to see that while the trailers of the film have been quite entertaining, the makers of the film have retained enough meat and comic element in the film that will keep the viewer engrossed. Screenplay writers Chris McKenna and Erik Sommers with assistance from Scott Rosenberg, and Jeff Pinkner have done a good job of interweaving the thrill of a jungle adventure with well-timed humour and ample doses of slapstick comedy. Similarly, director Jake Kasdan has done a tremendous job of developing the new version of JUMANJI into something that is light and entertaining. Unlike the previous film that featured a rather dark time travelling angle, the new one is much lighter making for an easy viewing experience for kids. Another high point for Kasdan is the way he has managed to tell the story of JUMANJI while simultaneously adapting it to resemble the format that a level based video game follows. This not only makes the film compartmentalized with each section featuring its own high points, but it also gives the audience a new adventure to witness as the segments progress. 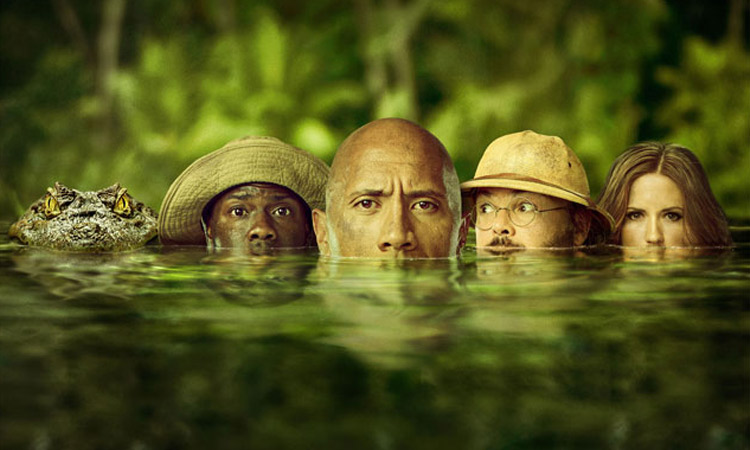 Coming to the acting, with a cast comprising of Dwayne Johnson as the nerdy hunk Dr Bravestone, Jack Black as Professor Shelly Oberon, Kevin Hart as Moose Finbar, and Karen Gillan as Ruby Roundhouse, one does not realty expect performances that are worthy of being nominated for awards. However, given the storyline and the humour element in the film, there is plenty of space for ham-acting that makes for an entertaining watch. In fact, in more instances than one, the kind of over the top hamming is a mandate that adds to the overall humour element. With that said, another point that needs to be mentioned is, though humourous, most of the comic element in the film surrounds Jack Black’s character that has undergone a sex change from being a self-centred bimbet in real life to a fat middle aged man in the game. However, despite this, the cast has performed well in their given roles managing to entertain while keeping the audiences in their seat.

Another major advantage for the new JUMANJI film is the advancement in technology and filmmaking capabilities that have greatly enhanced the viewing experience. Thanks to this, JUMANJI: WELCOME TO THE JUNGLE features some top grade visual effects and CGI that are seamlessly merged with the live action sequences. From the rolling jungle tree tops to the high octane chase sequences and of course the massive animal stampede, the CGI sequences are well developed.

On the whole, JUMANJI: WELCOME TO THE JUNGLE features a well-adapted storyline and screenplay that has been more than decently directed thus making for a fun watch. With well-timed humour combined with slapstick comedy, the film is certainly worth a watch.

However, at the Indian box office, JUMANJI: WELCOME TO THE JUNGLE will grow with word of mouth, as the latest Salman Khan flick TIGER ZINDA HAI continues to enjoy massive support from the audience.