Last Updated 28.01.2023 | 10:17 PM IST
feedback language
follow us on
Bollywood Hungama » Movies » Movie Reviews » Hate Story IV Movie Review: Hate Story IV has its fair share of intimacy and thrill, which has been the primary reason for the success of the series.

Hate Story IV Movie Review: Hate Story IV has its fair share of intimacy and thrill, which has been the primary reason for the success of the series.

HATE STORY has been a very successful franchise, with HATE STORY 3 [2015] doing huge business at the box office. So does HATE STORY IV also manage to entertain like the previous parts? Or does it falter like the recent adult flicks? Let’s analyse.

HATE STORY IV is the story of a girl who causes a rift between two brothers. Tasha (Urvashi Rautela) comes to London to become famous but is unable to find success. Luck favours her when she meets Rajveer (Karan Wahi), a photographer who is also a womaniser. He is floored by Tasha's glamorous appeal and recommends her to his brother Aryan (Vivan Bhatena) and his girlfriend cum business partner Rishma (Ihana Dhillon), both of whom are looking for a fresh face for their upcoming cosmetic brand. Tasha is signed and she becomes famous. Both Aryan and Rajveer start lusting after Tasha and try to get close to her. Meanwhile their father Vikram Khurana (Gulshan Grover) is running for London Mayoral elections and he has cautioned the brothers not to do anything untoward which would jeopardize his chances of victory. However, things begin to go wrong as Tasha gets involved with both Rajveer and Aryan. A mysterious blackmailer also emerges who has photographic evidence of all the wrongdoings, including a murder. What happens next forms the rest of the film. 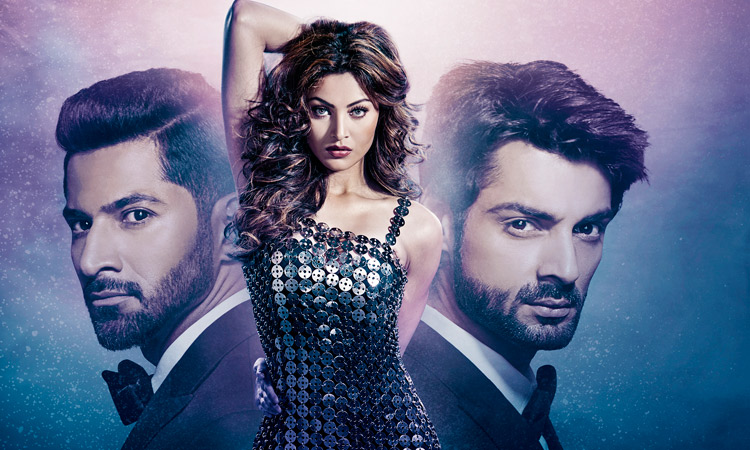 HATE STORY IV begins with intriguing opening credits and is quite nicely done. The first sequence is unexpected as the film begins midway and then the narrative goes in a flashback mode. Some of the recent erotic films failed as they didn't have adequate dosage of sex that the promos promised. HATE STORY IV thankfully is an exception. The film has enough steamy scenes and thrill to give the target audience its money's worth. Also despite the numerous twists, the narrative is very simple. Moreover, Hindi subtitles have been displayed during all the English dialogues. These efforts show that the makers want to ensure that audiences in B and C centers are able to fully enjoy the film.

Sammeer Arora's story is a bit weak and has far too many twists and turns after a point. But Sammeer Arora and Vishal Pandya's screenplay is simplistic and effective, though it fails to neatly camouflage some of the flaws in the plot. Milap Milan Zaveri's dialogues are appealing and massy. But it's not fair to have punchlines in practically every sentence. Vishal Pandya's direction is decent. He ensures that the film remains a complete commercial masala fare.

Urvashi Rautela has the oomph factor for sure and it comes to the fore very well. Even performance wise, she is decent and nicely manages to ooze evilness and vulnerability. Karan Wahi looks dashing and does a fine job. Vivan Bhatena has a slightly lengthier role and performs as per his character’s requirement. Ihana Dhillon also has her share of sizzling scenes but her screen time is limited and is okay. Gulshan Grover delivers quite an entertaining performance. Tia Bajpai (Bhavna) and Shaad Randhawa (Ashwin Chaudhary) are good in special appearances. Mohit Chhabra (Ron) and Rita Siddiqui (Monica) are average.

The music of HATE STORY IV is well woven with the narrative. ‘Aashiq Banaya Aapne’ is the best of the lot. ‘Boond Boond Mein’, ‘Badnaamiyan’ and ‘Tum Mere Ho’ come next and all these songs are laden with intimate scenes. ‘Mohabbat Nasha Hai’ is sadly wasted. Sunny Bawra and Inder Bawra's background score is quite exhilarating and adds to the drama and thrill. Sunita Radia's cinematography is neat and the film has been shot in some beautiful places and houses of England. Manish More's editing is slick while Neesha Sharma and Shyamli Arrora's costumes are quite glamorous, especially the ones donned by the girls.

On the whole, HATE STORY IV has its fair share of intimacy and thrill, which has been the primary reason for the success of the series. At the box office, it will prove to be a safe bet for the makers considering its investment and the returns.