Every year, we have had sleeper hits that come out of nowhere and turn out to be surprise successes. HAPPY BHAG JAYEGI was easily the dark horse of 2016. It released with minimal buzz and ended up doing decent business at the box office. Audiences loved the humour quotient a lot which helped the film sustain and even have a recall value two years later. The makers are now back with the sequel, HAPPY PHIRR BHAG JAYEGI and promises to be better or as funny as the first part. So does it manage to live upto the expectations? Or does it fail in its endeavour? Let’s analyse. 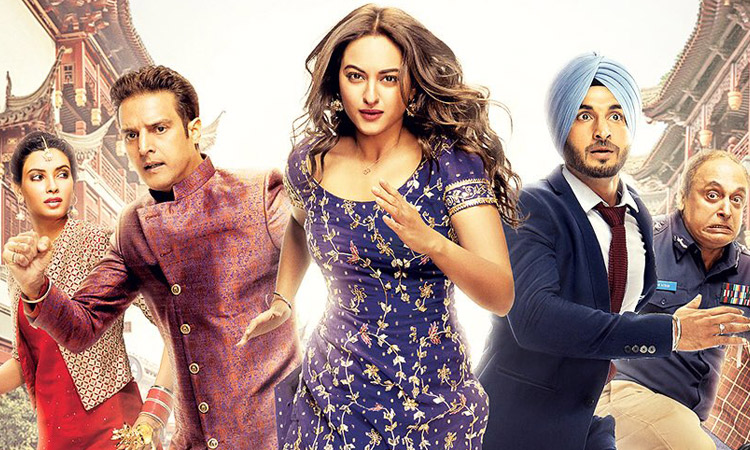 HAPPY PHIRR BHAG JAYEGI is the story of mistaken identity that takes place in the neighbouring country of China. Harpreet Kaur aka Happy # 1 (Diana Penty) is accompanying her hubby Guddu (Ali Fazal) to Shanghai in China where the latter is invited to sing at an event. In the same flight, Harpreet Kaur aka Happy # 2 (Sonakshi Sinha) is also flying to Shanghai to find Aman Singh Wadhwa (Aparshakti Khurana) who was to marry her but ditched and flew to China on the wedding day. Happy # 2 mistakenly takes the cab that had come to pick up Happy # 1. It is learnt at this point that Guddu has been tricked into coming to China by Chang (Jason Tham). They want to kidnap Guddu and then force Happy # 1 to go to Pakistan, meet her friend Bilal (Abhay Deol) and compel his father to get into a business deal that he had promised to fulfill but had later cancelled. Sadly for Chang and his men, they got Happy # 2. With no other option, they are forced to kidnap Daman Singh Bagga (Jimmy Sheirgill) from India and inspector Usman Afridi (Piyush Mishra) from Pakistan and force them into finding Happy # 1 and take her to Pakistan. Happy # 2 meanwhile runs away from the clutches of Chang and bumps into Khushwant Singh Gill aka Khushi (Jassie Gill), a sardar who works at the Indian embassy. He decides to help Happy # 2. Usman and Bagga too manage to get free from Chang's hold and they team up with Khushi and Happy # 2. What happens next forms the rest of the film.

Mudassar Aziz’s direction is simple and uncomplicated. He uses a bit of a non-linear style in the beginning and it works very well. In the midst of fun and laughter, he inserts the somewhat sad flashback sequence of Happy # 2 and yet it engages viewers. It’s also thanks to his direction that the glitches in the script get overpowered to a great extent.

HAPPY PHIRR BHAG JAYEGI doesn’t waste time and the story starts to move forward from the first scene itself. The misunderstanding owing to the name is neatly established. The real fun begins once Bagga and Usman enter the narrative. Their interactions are hilarious and take the film to another level. One of the funniest scenes is the madness that happens in Khushi's house when Chang arrives with Usman and Bagga. The flashback portion of Happy # 2 keeps the interest alive. The drama at the adult toy centre and the prison is not that funny but makes for an interesting watch. Also the film slips in the middle of the second half. But it picks up well in the pre climax. Watch out for the escalator sequence here; hilarious! The climax might be a bit underwhelming but has some funny moments. The film ends on a positive and 'Happy' note.

All the actors do a very commendable job. But it’s Jimmy Sheirgill and Piyush Mishra who take the cake. Jimmy Sheirgill is the soul of this series. By now he’s become a pro in playing roles of guys who don’t get the girl in the end. But he does it endearingly and it’s a treat to see that. Piyush Mishra comes next. He also contributes a lot to the funny quotient of the film. In the adult toy centre sequence, he is too good. Sonakshi Sinha delivers a very able performance. She completely looks the part and in some sequences, she dominates beautifully. Jassie Gill enters the series and even Bollywood with no expectations. However he turns out to be a nice surprise. Watch out for him in the scene where he starts blabbering nonsense while in shock. It’s sure to bring the house down! Diana Penty and Ali Fazal hardly have anything to do initially but give their best shot in the last 20 minutes. Jason Tham is an actor to watch out for. Denzil Smith (Adnan Chow) essays a novel and a never before seen character and is very impressive. Aparshakti Khurana leaves a mark but only in the second half. The actors playing Happy # 2’s father and sister are decent.

Sohail Sen’s music doesn’t work. The title song is the best of the lot. 'Swag Saha Nahi Jaye' comes next. 'Kudiye Ni Tere' is forced but stands out as it’s a rare song in today’s times sung by Udit Narayan. 'Koi Gal Nahi' is a forgettable composition but incorporating two Chinese men singing a Hindi song is funny! 'Chin Chin Chu' appears during the end credits. Sohail Sen's background score however is much better and suits the film's quirky mood.

Sunil Patel’s cinematography is sans complaints. Aparna Raina and Sheena Saini’s production design is realistic. Divya – Nidhhi and Ipshita Bhatnagar’s costumes are authentic and appealing. Ninad Khanolkar’s editing is slick but gets a bit dragging in the second half.

On the whole, HAPPY PHIRR BHAG JAYEGI turns out to be a worthy sequel. Despite the loose ends, it manages to make audiences laugh thanks to its funny dialogues and situations, clean humour and bravura performances. At the box office, it will turn out to be a decent fare.

10 Best sequels of all time

movie is good only for time pass. not a very good story and light comedy was good. only once…