It is known that the remakes and reboots are kind of Hollywood’s thing. In the recent past, many remakes like JUMANJI and MURDER IN THE ORIENT EXPRESS have made its way to the big screen. While some have done a little justice to the original movies, others have failed to impress the audience. Going on the same lines is the Bruce Willis’ gritty violent action-thriller, DEATH WISH, a remake of 1974 controversial film. For the uninitiated, the original DEATH WISH film starred Charles Bronson, Hope Lange, Vincent Gardenia, Jack Wallace, and Stuart Margolin among others. The original film was a dark drama which revolved around a man who becomes a one man vigilante after his wife’s murder and assault on his daughter. Will this Bruce Willis version of the film impress the audiences? Lets analyse. 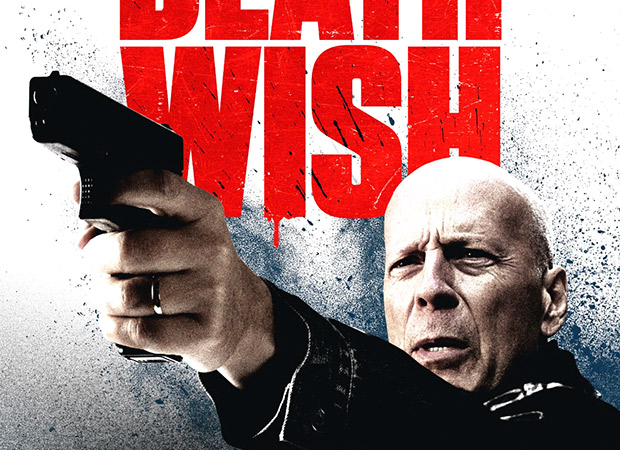 DEATH WISH (2018) follows the story of a doctor Paul Kersey (Bruce Willis) who is leading a normal life working in an ER in Chicago until tragedy hits him. His wife Lucy Kersey (Elisabeth Shue) is murdered and daughter Jordan Kersey (Camilla Morrone) is in coma after a break-in at their house. This leaves him grieving and frustrated at the same time because the lack of the progress on the case by the police. Eventually, Paul Kersey decides to take justice in his own hands and follows the path of vigilantism. From getting untraceable weapons to taking lessons from Youtube, Paul takes the vigilante path to seek vengeance. Not only does he question that his actual profession as a doctor is about saving lives but somehow he has chosen now to take crime out of the streets. When he does get the lead on the goons who had broken into his house, he plans to seek revenge.

Elli Roth’s DEATH WISH starts off a little slow as the story of the family is set up first and every key character is introduced. Even after the tragedy takes place, Bruce Willis’ character takes time for the reality to sink in, while his daughter recovers from her injuries. However, once Willis turns into a vigilante, the film goes into a fast track mode with its action thriller theme. The best part about the film is that director Roth maintains subtle humour throughout the film, especially after a doctor who has never even used a gun, turns into an amateur vigilante at night and shoots down the bad guys.

Bruce Willis who essays the role of Paul Kersey is just as good as he is in his previous films. Every DIE HARD fan knows what he is capable of when it comes to acting and action. He takes over the role of Charles Bronson but nothing like the original character. He is angry, flippant and just in shooting spree. Dean Morris of Breaking Bad fame essays the role of Detective Kevin Raines. He makes a strong impact on screen. Elisabeth Shue, who essays the role of Lucy Kersey, has less screen time but is good in whatever time she has. Vincent D’Onofrio, who plays Paul Kersey’s ex-con brother, has literally nothing to contribute in the story. Camila Morrone is impressive in her role as Jordan Kersey.

The screenplay by Joe Carnahan is average. It does build an emotional connect with the Kersey family but one does feel that the writing could have been stronger, especially when you have such a stellar cast to perform the material on screen.

Cinematographer Rogier Stoffers uses stunning camera angles, especially while shooting the city at night during the vigilante scenes. Mark Goldbatt’s editing is tight and crisp. Ludwig Goransson’s music is catchy and helps build the momentum. The action scenes are shot very well as the gun fights are quick and action is very situational.

On the whole, DEATH WISH is an action thriller which has a basic storyline but manages to entertain with its action scenes and subtle humour. The film will appeal to the hardcore Bruce Willis fans.