Last Updated 07.02.2023 | 11:08 PM IST
feedback language
follow us on
Bollywood Hungama » Movies » Movie Reviews » 1921 Movie Review: Deals with a couple's battle with extreme paranormal activities created by a ruthless and cursed spirit. But1921 is essentially a routine horror drama that offers nothing new

1921 Movie Review: Deals with a couple's battle with extreme paranormal activities created by a ruthless and cursed spirit. But1921 is essentially a routine horror drama that offers nothing new. 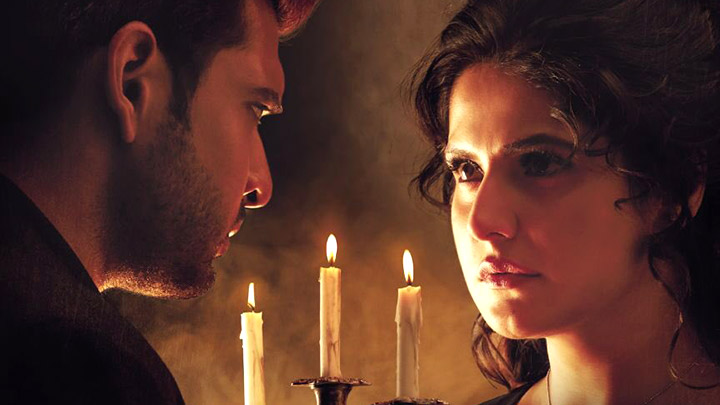 Horror can never go out of fashion, despite the fact that many horror films in recent times like DOBAARA, RAAZ REBOOT, THE FINAL EXIT, MONA DARLING, ALONE etc haven’t done well. Vikram Bhatt, the horror expert of Bollywood, who made several scare fests in the past has now come up with 1921, as a follow up to the 1920 franchise. So does he manage to give a chill down the spine this time? Or does he fail in giving audiences a scare? Let’s analyse.

1921 deals with a couple’s battle with extreme paranormal activities created by a ruthless and cursed spirit. Ayush (Karan Kundra) is from Mumbai (then Bombay) who plays the piano really well. The kind hearted and rich Wadia (Vikram Bhatt) tells him to go to the city of York in United Kingdom to learn music. He offers to sponsor Ayush's fees and in return he has to be the caretaker of Wadia Manor in York. Ayush hence goes to UK. In the mansion, he starts having piano sessions where listeners are asked to pay him if they wish. Wadia's niece Mehar finds out about it and confronts Ayush. A scared Ayush begs her for forgiveness. She asks for a private piano session and attempts to seduce him. In the ensuing madness, Mehar is accidentally killed. Ayush is petrified as an evil spirit starts to haunt him. At this point, he learns about Rose (Zareen Khan) who can communicate with the dead. He asks for her help and Rose readily agrees as Ayush’s music has helped her heal old wounds. What happens next forms the rest of the film.

1921 comes at a time when audiences have in a way seen it all when it comes to stereotypical horror films. Vikram Bhatt himself has made several such flicks and in that aspect, 1921 doesn’t offer anything new. Few sequences do give a scare but that’s about it. The romantic track is lackluster and sans any sizzle. There comes a point in the first half when Ayush reveals the truth to Rose by writing a letter and Rose too shares things about her life to Karan in a letter. This bit is quite nice and also the intermission point that raises curiosity. But things go downhill in the second half.

Vikram Bhatt’s story is intriguing till the point that all the cards are not laid out on the table. Once that happens, it turns out to be disappointing as it gets too complex after a point. Vikram Bhatt, Tanya Pathak and Esha Desai’s screenplay is routine and nothing extraordinary. Vikram Bhatt’s dialogues are filmy as always. Vikram Bhatt’s direction is ordinary and doesn’t bring any novel value. The horror bit is underwhelming. Even the masses, for whom the film is primarily targeted, will give it thumbs down as even they have been watching Hollywood horror films in dubbed versions and they are much ahead than a film like 1921.

Zareen Khan gives a fine performance and gets a chance to display her acting prowess. She is in much better form here than in her last release, AKSAR 2. Karan Kundrra gets a bit over the top but has a good screen presence. The actor playing Nafisa leaves a mark. The actor playing Vasudha and Dina Shaw do a good job. Vikram Bhatt is strictly okay in the cameo.

Harish Sagane’s music is disappointing. Music plays an important part in the film as Ayush is shown as a reputed performer. Also his music heals Rose. But the songs don’t do justice to this aspect. ‘Sunn Le Zara’ and ‘Aanewale Kal’ are a bit memorable. The rest - ‘Kuch Iss Tarah’, ‘Yaara’ and ‘Tere Bin’ are forgettable. Sangeet and Siddharth Haldipur’s background score is dramatic.

Prakash Kutty’s cinematography is alright. Kuldip Mehan’s editing is tacky. Iain Andrews’s production design brings alive the bygone era. The film is shot in some beautiful locales but using the same location again and again takes away the sheen and brings to the fore the low budget element of the film.

On the whole, 1921 is a routine horror drama that offers nothing new. At the box office, it may find some audience during the weekend but later on, it will find it difficult to sustain.

“Audience has always been open to novel ideas, it is filmmakers who are scared” – Vikram Bhatt

This movie is awesome... If you don't belive on me, then you need to see it... And if you watch…