Readers would be aware that Bhaijaan Salman Khan was in Hyderabad to shoot for Kabhi Eid Kabhi Diwali. During the same, the actor caught up with many of his friends from the South industry. Amongst meeting friends like Chiranjeevi and Venkatesh, the superstar also met up with RRR actor Ram Charan. The latter hosted a dinner for the superstar along with his wife Upasana and his co-star Pooja Hegde too had joined the get-together. Now, the South actor hosted yet another dinner for another Bollywood superstar – Aamir Khan. 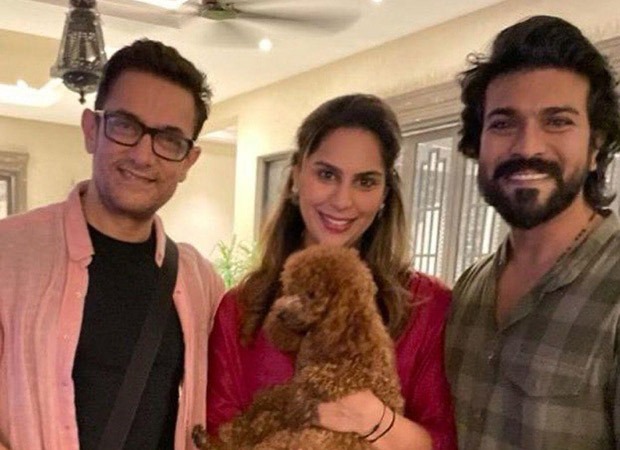 In a recent post shared on their dog Rhyme’s Instagram page, Upasana Kamineni and South star Ram Charan revealed that they had hosted a dinner for Aamir Khan. Similarly, Upasana too took to social media to share not only this photo but also the pic that was clicked alongside the Laal Singh Chaddha actor. She posted the two photos on her Instagram page saying, “Our darling @alwaysrhyme  is getting too much love. Thoroughly enjoyed both evenings. @alwaysramcharan @beingsalmankhan @hegdepooja @venkateshdaggubati #aamirkhan.”

Earlier today, we had reported that Aamir Khan had also bumped into Amitabh Bachchan while the latter was leaving the grand opening ceremony of Vyjayanthi Films office in Hyderabad. The legendary actor had posted about it on social media where he revealed that he had met his Thugs Of Hindustan co-star when he was leaving after the get-together with his Project K co-star Prabhas, Dulquer Salmaan, Nani, Nag Ashwin, KGF director Prashanth Neel among others.

Speaking of Aamir Khan, the actor will next be seen in Laal Singh Chaddha alongside Kareena Kapoor Khan, and it releases on August 11. There are reports that Aamir will also be doing a film with SS Rajamouli but there has been no confirmation regarding the same.