Last Updated 25.09.2022 | 4:31 PM IST
feedback language
follow us on
Bollywood Hungama » News » South Cinema » Dhanush says he is ‘coolest dad’ after attending LA premiere of The Gray Man with sons Yatra and Linga: ‘They were so chill and so cool’

Netflix is coming up with the Russo Brothers’ next action movie, The Gray Man, starring some of the biggest actors from across the globe, and is set to have the audience on the edge of their seats. The film stars Ryan Gosling, Chris Evans, Ana de Armas in lead roles with Dhanush in a pivotal role. Ahead of India premiere, Dhanush attended the LA premiere with his two sons Yatra and Linga. 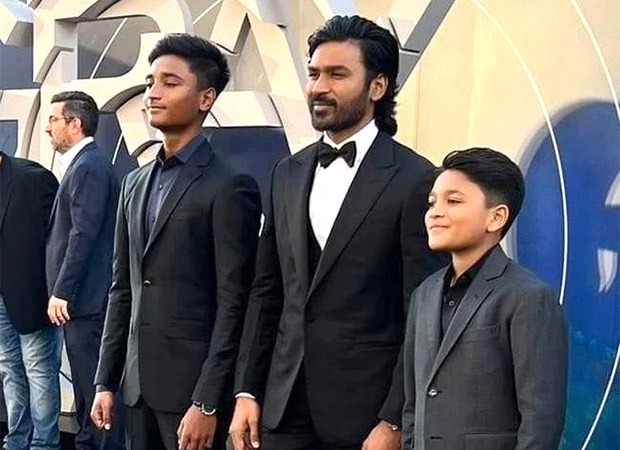 Dhanush says he is ‘coolest dad’ after attending LA premiere of The Gray Man with sons Yatra and Linga: ‘They were so chill and so cool’

At the press conference on Thursday in Mumbai, the actor said, “They (Yatra and Lingaa) loved the film. They were so chill and so cool. It was exciting for me, but I was very nervous thinking about the red carpet. While they were so cool playing games on their mobile phones, it meant the world to me that they were by my side. There is always a first for everything and it was my first Hollywood project, and it couldn’t have gotten bigger than this. Having them next to me meant everything.”

The actor chose traditional Veshti for the red carpet on Wednesday and shared a photo with the two directors Joe and Anthony Russo. "Welcome to India @Russo_Brothers #Vanakkam," he wrote on Twitter.

Joe Russo, at a roundtable which was attended by Bollywood Hungama, admitted that Dhanush first caught his attention when they were working on Marvel movies. “It was interesting that while we were working on the Marvel movies, we would research action sequences from other films as inspiration and look for ideas. We have a very good stunt team that we have worked with for years and everyone brings ideas to the table. A lot of times, we’d look at clips from other movies. I noticed that we would see a lot of clips of Dhanush in action,” he said.

Joe added, “After seeing two or three clips, I was like ‘Who is this?’ That’s how we came to know Dhanush… it was while working on Marvel films. Dhanush inspired a couple of sequences and hand-to-hand combat scenes in those movies.”

He further said, "When we were working on The Gray Man, it was the perfect opportunity because it was such a global story. The concept is that assassins from all over the world get hired to stop the Gray Man. We thought it would be fantastic to get Dhanush to play the deadliest assassin of them all who is the one who actually does stop him."

"We had no idea if he would respond to the script or if he had any interest in working on a movie like this. We are so grateful that he did because we wrote the part for him and it would have been really sad if he said no," the director quipped, with Dhanush smiling sitting beside him.

The Gray Man is exclusively coming on Netflix on the 22nd of July.