All set to release tomorrow, the romantic comedy Ante Sundaraniki is garnering immense attention from the audience, especially the youth. The amazing chemistry between Nani and Nazriya Nazim already seem to woo everyone and a recent photo of them posing as Sarah Jessica Parker and Matthew Broderick is proof why this couple looks adorable together. 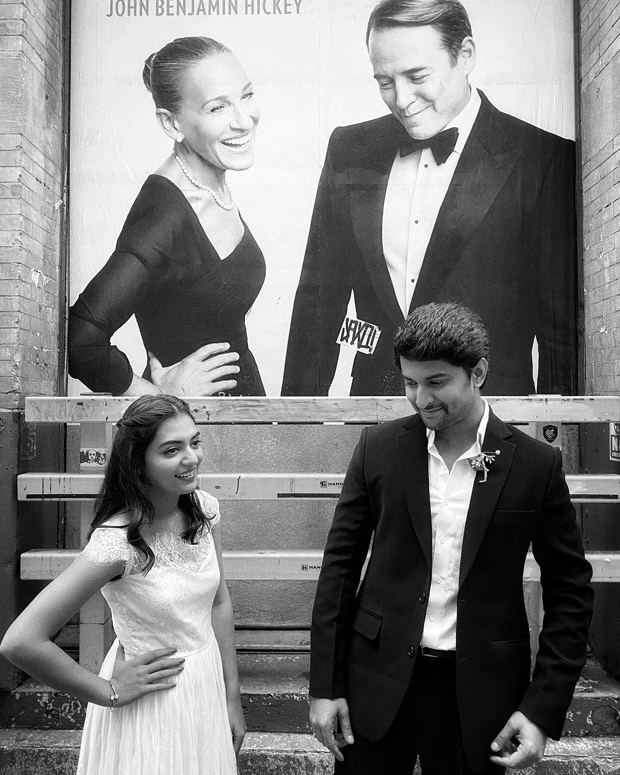 In a recent post shared by Nani, the actor shared a moment from their New York shoot schedule where we can see him and Nazriya Nazim imitates Sarah Jessica Parker and Matthew Broderick from a poster behind them. The adorable photo was captioned saying, “Sundar and leela goofing in New York streets ???????? #AnteSundaraniki @nazriyafahadh”. Readers would be aware that Nani plays the role of a Brahmin boy named Sundar Prasad whereas Nazriya plays the role of a Catholic girl named Leela Thomas.

After Nani shared the picture, fans of the actor and the onscreen couple have been going gaga over it. Many of them dropped heart emojis appreciating the poster and some of them expressed their love for the couple too. “Always My Favv ❤️ Both????” commented a fan whereas “Cutiesss❤️❤️❤️”, commented another.”

Speaking of Ante Sundaraniki, the film is directed by Vivek Athreya and music is composed by Vivek Sagar. The Telugu rom-com also stars Rohini, Nadiya, Harshvardhan among others. With cinematography by Niketh Bommi and editing by Raviteja Girijala, the film is produced by Naveen Yerneni and Ravi Shankar Yalamanchili, under the banner Mythri Movie Makers. It is slated to release on June 10.

Mahesh Babu talks about his next with…