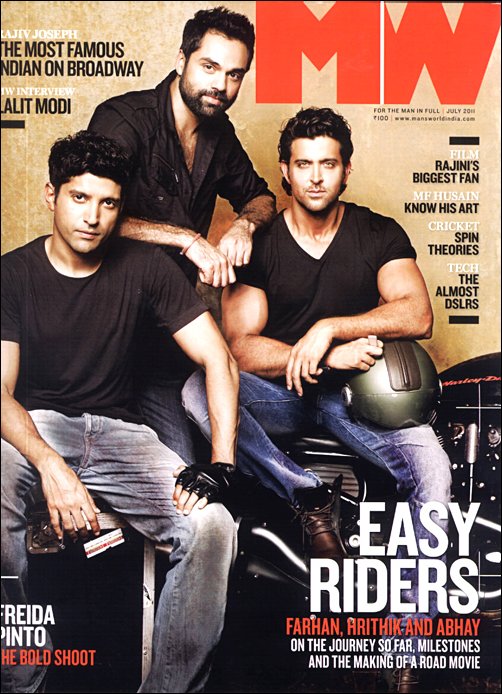 Adventure junkies Hrithik Roshan, Farhan Akhtar and Abhay Deol talk about getting into a character's memories, the world of Amitabh Bachchan fans and their new road movie Zindagi Na Milegi Dobara where in they have done adrenalin pumping adventure sports like skydiving, cliff diving and scuba diving, in the latest issue of MW.

The Zindagi Na Milegi Dobara trio looks hot and spruced up for the cover in the black t-shirt and jeans combo along with their biker gear. The camaraderie between them is easily visible in their photo shoot.

The film's director Zoya Akhtar also shares an interesting incident that took place while filming ZNMD. Hrithik, Farhan and Abhay were in a large SUV as part of the shoot, Hrithik was at the wheel and he was supposed to drive the car to the very edge of a cliff, park it and get off. He did just that, only he forgot to pull the handbrake. The car started rolling forward towards the edge of the sheer drop as a stunned Abhay and Farhan watched. "We would have lost two actors that day," says Zoya. But Hrithik leaped into action. He grabbed the monster of a car, Krrish-style, and started pulling it backwards to stop it from plunging below. Meanwhile, Farhan and Abhay gathered their wits and jumped out of the car and ran in the opposite direction. "Of course, he (Hrithik) eventually pulled the handbrake but his first instinct was to become a superhero. We teased Hrithik so much after that," laughs Zoya.