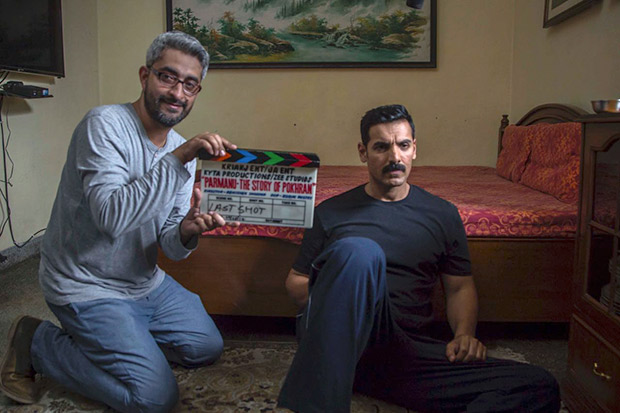 Prernaa Arora of KriArj Entertainment had earlier stated that Parmanu will be a game changer for John Abraham. The film that talks about India’s nuclear test had gone on floor earlier in the month of June and now the shoot of the same has been wrapped up.

Recently, we saw director of the film Abhishek Sharma posing with the clapperboard as he took the final shot of the film. This wrap up picture features an intense looking John Abraham sporting a moustache. As for Parmanu, the film talks about the series of nuclear bomb test explosions that were conducted in India and hence it focuses on a story that is amalgamation of Indian military force as well as science. It was extensively shot in some varied locations in Rajasthan.

Prior to this, we had also got a glimpse of John Abraham in military attire and the film also stars Diana Penty in a prominent role. This being her first action oriented film will have Diana doing some high octane stunts alongside John. Prernaa had described that the film is based on the concept of ‘Jai Jawaan Jai Vigyaan’ wherein it focuses on science as well as a noble cause.

Produced by KriArj Entertainment in association with JA Entertainment, Kyta Productions and Zee Studios, Parmanu is slated to release on December 8.