Last Updated 17.10.2021 | 12:16 PM IST
feedback language
follow us on
Bollywood Hungama » Movies » Movie Reviews » Parmanu – The Story Of Pokhran Review » Parmanu – The Story Of Pokhran Movie Review: Parmanu is an excellent saga that has a big chance of working at the box office despite the low buzz. The patriotic fervor and simple, effective narration works big time. Recommended!

Review: Parmanu is an excellent saga that has a big chance of working at the box office despite the low buzz. The patriotic fervor and simple, effective narration works big time. Recommended.

When India got independence in 1947, it was a challenge for those who assumed power. After all, they had to start from scratch in several areas and aspects. These challenges continue till date but it’s heartening to see that despite a lot of hurdles, India has made great progress in a lot of fields. One of the achievements was becoming a full-fledged nuclear state and this happened due to a series of nuclear tests carried out in Rajasthan town in 1998. The entire story behind these nuclear tests is quite fascinating and surprisingly, no filmmaker had picked it up in these two decades. Finally, actor-producer John Abraham took the challenge and has come out with PARMANU – THE STORY OF POKHRAN. So does the film turn out to be an engaging and thrilling fare? Or does it fail in its endeavour? Let’s analyse. 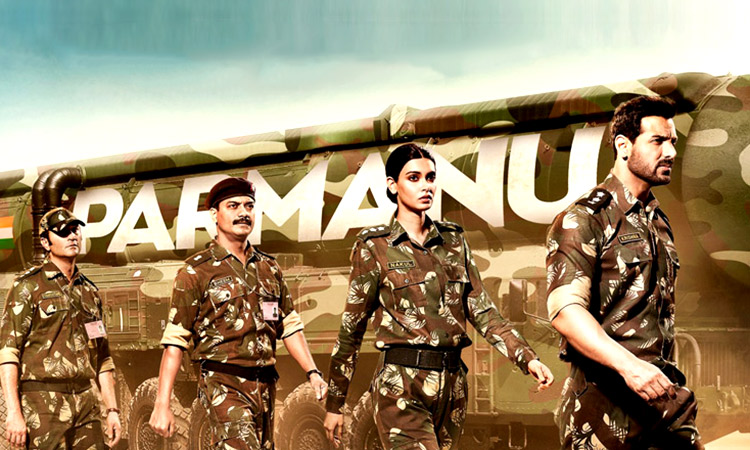 PARMANU – THE STORY OF POKHRAN is the story of those people who secretly carried out a series of nuclear bomb test explosions in Pokhran on May 11, 1998. Ashwath Rana (John Abraham) is from the research department of the Central Government and in 1995, he advises the Prime Minister’s Office to conduct nuclear bomb tests in order to achieve supremacy in this field and establish fear among the nuclear powers of the world. The plan gets accepted but he’s not made a part of it. His plan is also not studied well. As a result, USA's satellites catch India preparing for the tests red handed. India is left red faced and Ashwath is made the scapegoat. He is removed from his job and shifts to Mussoorie with wife Sushma (Anuja Sathe) and son Prahlad. For the next 3 years, Ashwath does odd jobs while Anuja runs the house by working in an observatory. In 1998, Atal Bihari Vajpayee is made the Prime Minister. His principle secretary Himanshu Sharma (Boman Irani) summons Ashwath and asks him to help with the nuclear tests. Ashwath agrees and devises a plan to prepare and conduct the tests without the USA getting a whiff of it. He also prepares a team comprising of Ambalika (Diana Penty), Dr. Viraf Wadia (Aditya Hitkari), Dr. Naresh Sinha (Yogendra Tikku), Major Prem Singh (Vikas Kumar) and Purunganathan. How they manage to work together and put India on world nuclear map forms the rest of the film.

PARMANU – THE STORY OF POKHRAN has a shaky start. The 1995 sequence doesn’t involve viewers properly. It’s when Ashwath meets Himanshu is when the film picks up. From here, the film goes on another level and it’s fun to see Ashwath assembling his team and fooling USA. The intermission comes at a great point. The second half is better as the Pakistani spy (Darshan Pandya) and CIA agent Daniel (Mark Bennington) try their best to fail Team Ashwath's mission. There’s also sudden humour quotient added and it works very well especially in the confrontation scene between Ashwath and Sushma. The best is reserved for the finale. It is very well handled and the patriotic fervor comes out beautifully.

Saiwyn Quadras, Sanyuktha Chawla Shaikh and Abhishek Sharma’s dialogues are nothing great but look real and conversational. Abhishek Sharma’s direction flows quite easily and is to the point. He very nicely packs in a lot in 130 minutes. However, one wishes if the tension levels could have gone higher. A film like this should have had more edge of the seat moments for an added impact. Also, though the team is shown facing roadblocks, it seemed a bit convenient at most places. Thankfully, the film has enough plusses that overpower these glitches.

John Abraham delivers one of the best performances of his career. His act is subtle and yet leaves a mark. His character has suffered a lot and this bit comes out very well. Also he’s not shown as an invincible killing machine which is his image. Yet he pulls it off very well! Diana Penty has a crucial part and essays the no nonsense character very well. Boman Irani delivers an incredible performance and it was a pleasure to see him on screen after ages. Vikas Kumar is totally believable as an army major. Yogendra Tiku raises laughs while Aditya Hitkari looks quite smart and gives an impressive performance. Darshan Pandya leaves a mark. Anuja Sathe is very good and manages to create an impact with her supporting role. Mark Bennington and Zachary Coffin (Stephen) are okay.

Sachin-Jigar’s music doesn’t get much scope and all songs are relegated to the background. 'Thare Vaaste' is the only song that stands out, more so because of the execution. Sandeep Chowta’s background score is theatrical and impactful but has a major Hans Zimmer hangover which could have been avoided. Zubin Mistry’s cinematography is quite nice and captures the barren locales of Rajasthan well. Rameshwar S Bhagat’s editing is slick. T P Abid and Sandeep S Ravade’s production design is very authentic and realistic. Amar Shetty’s action is sans any gory.

On the whole, PARMANU – THE STORY OF POKHRAN is an excellent saga that has a big chance of working at the box office despite the low buzz. The patriotic fervor and simple, effective narration works big time. Recommended!

Reality Check: It’s all about how a good story is told!

Gold vs Satyameva Jayate: John Abraham opens up about clash with Akshay Kumar on this Independence Day

After Parmanu - The Story of Pokhran, Ajay Kapoor and John Abraham come together for Romeo Akbar Walter

amazing movie. certainly John's best performance till now. if u lived those days 95-98 will…