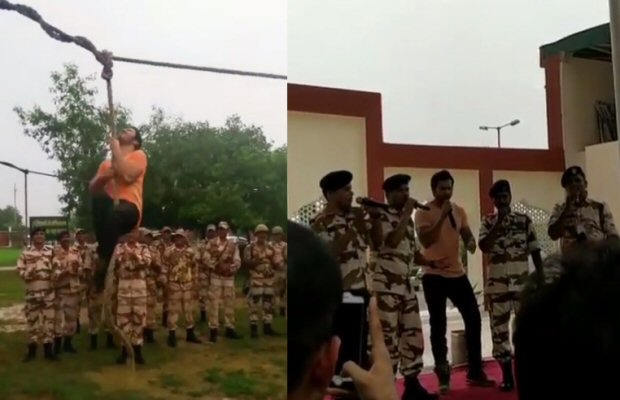 Varun Dhawan’s love for our armed forces was seen a few days ago when he attended the headquarters of Indo Tibetan Border Police (ITBP) in Greater Noida near Delhi. Now the actor has posted two videos which enlighten his fans about his activities in the camp.

The first video showcases Varun Dhawan singing the touching song ‘Sandese Aate Hai’ from the 1997 epic war film Border with ITBP officers at what seems like a musical event. This particular song is a favourite among army officers as it deals with the sadness they go through for staying away from their loved ones. The actor chose the apt song to perform and definitely it must have been loved by the jawans.

The next video is exhilarating, showing Varun Dhawan climbing a rope, vertically as well horizontally. The actor struggles at places but he manages thanks to his fitness levels and motivation by ITBP officials. It was not an easy feat and it’s praiseworthy that Varun Dhawan fulfilled the challenge successfully.

On the film front, Varun Dhawan is gearing up for the release of Judwaa 2, directed by his father David Dhawan and co-starring Jacqueline Fernandez and Taapsee Pannu. It releases on September 29 and its trailer will be out on August 21.

Happy Independence Day ????????????. Today we can enjoy this day only because of our jawaans who sacrifice their lives for us. #jaihind. Feel so much love in my heart for my country and my countrymen. India is such a beautiful country. The fact that so many religions and cultures have lived together for so many years in this country proves that we are a leading democracy with a big heart

Training with our commandos was defiantly one of the highlights of my visit. I tried a lot of their drills. Trust me it's not easy. #jaihind. After completing each task they scream #commando.