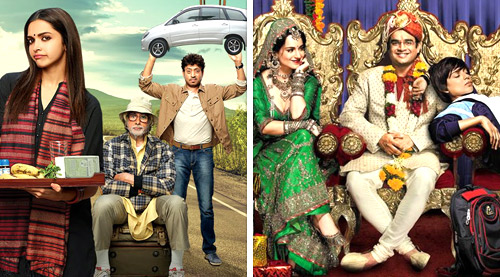 May 2015 will go down in the history of Indian cinema as a watershed moment when two female led films separated by just two weeks- Piku and Tanu Weds Manu Returns- completely destroyed everything that Bollywood has taught us for decades about the limitations of investing, creating and promoting female centric films shorn off 'dependable' male superstars. While Piku is well on its way to clock historic figures in India and abroad- having broken into 100 cr worldwide club, Tanu Weds Manu Returns, coming back on the successful prequel Tanu Weds Manu, has posted unprecedented weekend figures that usually come attached with Khans, Kapoors and Kumars of Bollywood.

While figures are one story, the real story is that for the first time we have two female protagonists who subvert patriarchy- While Piku and her Baba, are ok with her casual relationships and her father introduces her as his "non-virgin, sexually, financially independent daughter who just seeks emotional companionship", Piku is still rooted in the values that tell the viewers that she wouldn't let go off her father just because she wants to marry someone. Multi-tasker, breadwinner and someone who believes that, "you cannot judge your parents", Piku is everything that Bollywood has been scared to describe as an ideal heroine in a film! More importantly, in Piku's Baba, we have the most progressive father Hindi film industry has seen. He, for a change, doesn't want that his daughter should marry without any purpose in life. Why is marriage so important and just why must eventually every Bollywood film end with the girl falling for the guy? Piku asked these pertinent questions and audiences across the world gave the film a thumbs up!

In Tanu Weds Manu Returns, we are shown that a woman runs away from her husband, comes to India and goes on a "flirtation" spree as "sparks" of all kinds die in her marriage. She drinks unabashedly and is loud, chaotic and everything that would actually be an anti-thesis of an ideal wife, yet she resolves her issues with her husband, who must only find solace in her or someone like her! The other character played by Kangna in the film, Kusum, is shown as a feisty woman who is not scared to hold her heart and run with it, declaring a war on patriarchy. It's Tanu and Kusum who are the active lovers whereas Manu becomes a passive beloved in the process. It's no mean feat! More importantly, there is a critical sub-plot where Tanu's friend conceives a child through artificial insemination and without any melodrama, the husband eventually comes to terms with his lack of "manliness". The success of both the films, defined as family entertainers, has shown us that audiences are far more mature and accepting than the industry and trade considers them to be.

Directors Shoojit Sircar and Anand L Rai have given us films that will go far beyond their lifetime collections. Audiences are forcing us to change. They have given us enough hints when they went to theatres for a Kahaani, a Queen and an English Vinglish. But the sheer box office numbers of Piku and Tanu Weds Manu Returns and that too within 14 days of release from one another have created something else. This feeling that the time is here for us to treat our female superstars on par with the male superstars. After all, we are just talking numbers and little else!