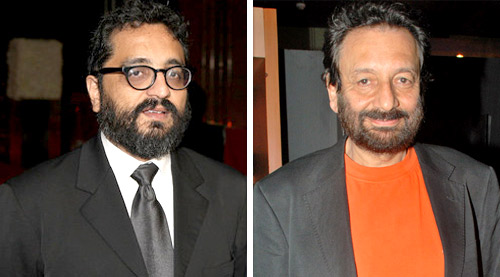 1. Both are brilliant directors with an international feel and texture to the quality of their cinema, their cinema has gone way beyond 'bollywood'.

2. Both Shekhar and Shimit are tardy geniuses. Their output has been inconsistent, sporadic and most irregular.

3. Both brooders, meditative gypsies of the creative world known to be silent observers rather than violent talkers.

4. Compassionate human beings, both. Socially and politically aware, receptive in their own lives and in their cinema to influences and problems faced by the world outside.

5. Both directed their last film more than five years ago. Shekhar's last directorial venture was Elizabeth The Golden Age in 2007. Shimit Amin last film Rocket Singh Salesman Of The Year was released in 2009. Both bombed.

6. Both have a deep Mira Nair connection. Shekhar and Mira made a short film each for the anthology titled New York, I Love You and became close friends. Shimit edited Mira's last film The Reluctant Fundamentalist.

7. Both Shekhar and Shimit are essentially global in their outlook. Shekhar has spent a major part of his life travelling across the world. Shimit was born in Kampala. He studied filmmaking in the US. Their international ethos shows in their work.

8. Shekhar created cinematic history with Mr India. Shimit did the same with Chak De India. These two timeless works of pop-art are among the most popular films of our times, equally relatable to the young and old alike.

9. Shimit's first directorial venture Ab Tak Chappan recently spawned a badly-received sequel. There is talk of a sequel for Shekhar's Mr India. Hopefully it would do less damage to the original film.

10. Both Shimit and Shekhar are all set to direct their next film for Yash Raj Films. Known for their languorous pace of work it's a race to who finishes last for these two master creators of magical movies.

“Ever since I was child, I was influenced by…