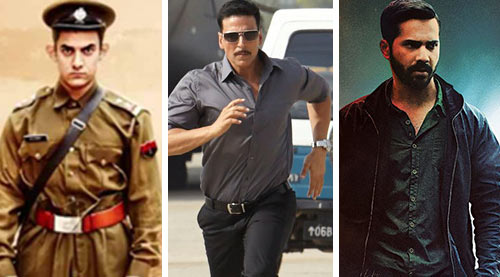 Films are getting shelved left, right and center. Though a few filmmakers have made official announcements that their films are off the hook now, others have mentioned that it is just a delay and not quite a 'shelving' per se. One wonders what really is plaguing the industry in general, as a result of which there is some or the other film being threatened to be S H E L V E D - that scary sounding seven letter 'S' word.

Is it indeed the topicality of the theme or unavailability of dates? Or is it a challenge that is being thrown back on the content, courtesy some horrible times that Bollywood has faced in recent times when only PK and now, Baby, Badlapur and Dum Laga Ke Haisha have worked? Or is it the crashing/correction of the satellite prices, which have gone drastically down? Or is it (finally) the realization of how a project is different from a film?

"The audience is sick and tired of being taken for granted and will not validate crap in the name of Entertainment/Cinema. The corporates have bled dry mainly due to their own stupidity in green lighting projects because of stars and not content," explodes filmmaker Sanjay Gupta, who has never shied away from calling spade a spade, "The satellite crash has brought a temporary hurdle in creating projects as the viability has reduced by 40%. And lastly a MASSIVE correction is required in star prices. Not that they don't deserve, but the model should be - MAKE MONEY, TAKE MONEY."

Says Girish Johar, distributor and film business analyst, "Actually there are multiple factors at play, and they are all rolling together, which is not good for the industry. Content is definitely not up to the consumer expectations, marketing & releasing of films cost has sky rocketed while box office as well as satellite revenues have dried up as well. Every week there are multiple films releasing and failing, which is further adding pressure to the ailing industry."

He goes on to add, "Piracy is rampant and competition entertainment from other sources is on the rise. Ticket prices are only increasing with every passing month. Lastly, star costs are not decreasing. So all of this has made a huge dent on the producers' mind. They are compelled to rethink hundred times before launching or starting a new film. We are in a phase now where new dynamics of movie making are being evolved."

Now high ticket price is a common theme that has emerged from many sources.

"Yes, that's a big issue," says Vipul Shah, "You can't expect people to pay so much money every week and that too for small films." Abhishek Pathak adds, "Ticket prices have gone super high and hence audiences have become much more pocket conscious when it comes to going out for a movie. They would rather prefer to wait for the right film. If you look at Hollywood film business in India then it's way better than our Hindi films. Just see around you - Interstellar is still running in theatres. What does that tell us?"

Of course a lot, something which trade expert Atul Mohan opines, "You know, the entire system is a vicious circle. Let me explain how. See, the ticket price is the biggest problem. It discourages people to come to cinema. As a result, the audience footfalls go down and collections head south too. When something like that happens, satellite prices go down too since business, as promised by the producer, is not as much. With lesser recovery from all perceived sources, the producer gets impacted too and his morale goes down to make new films."

"Meanwhile, when some biggies do not perform, audience morale also nose dives and this is when some deserving films flop too. I guess for starters, we need to have lower price of tickets. That may well start bringing audience back in theaters and the circle could start rotating in the entire direction. We may well start hearing announcements around more films going on floors than the ones that get shelved," he adds in a hopeful tone.

Tanuj Garg, a leading media and entertainment industry professional, and former CEO - Balaji Motion Pictures, rounds it up, "I think it's a combination of issues. But essentially some producers are becoming extremely cost conscious and green-lighting films based on rigorous commercial parameters. This is partly due to the slump in the satellite market and the increasing rejection of the age-old formula. The audience has become selective and unscrupulous and this is keeping on screen and off screen talent on its toes."