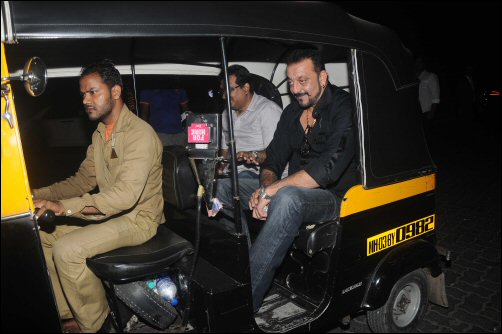 Till a couple of days back, the Kurla resident Abdul Hakim was an unknown autorickshaw driver. But, today, he has become an overnight

celebrity of sorts. The reason? It was his autorickshaw in which Sanjay Dutt took a ride back home.


It so happened that Sanjay Dutt, who was dressed in a casual black shirt and pants, had arrived for a late night meal at the posh Yauatcha restaurant in

Mumbai's Bandra Kurla Complex. Reports state that, Sanjay Dutt, later stepped out to smoke a cigarette and then left for home in an autorickshaw.

enough, he even posed for the photographers present there and also exchanged his trademarked 'jhaado ki jhappis' with them.