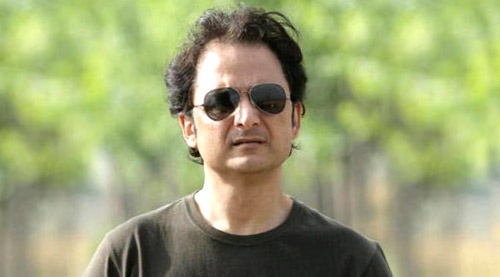 Director duo of Radhika Rao and Vinay Sapru is a known name in the industry. Other than directing the Salman Khan starrer Lucky-No Time for

Love, they have also been a regular with the superstar when it comes to directing songs from his films (Prem Ratan Dhan Payo, Dabangg, Dabangg 2, Jai Ho).

While they run their own company which makes commercials, they are now getting ready with Sanam Teri Kasam. After working with Salman and other big names like Sunny

Deol and Kangana Ranaut [I Love NY], they are working with a newcomer jodi [Harshvardhan Rane, Mawra Hocane] for the first time ever.

Over to Vinay Sapru.

You and Radhika certainly have a thing or two for sweet and simple love stories. Is that something that makes Sanam Teri Kasam special too?

See, our work is inspired by fairy tales and fables. Sanam Teri Kasam too is inspired in that sense, though it is set in Mumbai. The film has its base in a

real life incident which happened in Radhika's building some time back. She lives at the seventh floor and one day she came across the Chairman and the Secretary of

the society who were locking up the gates of the terrace. On asked, they told Radhika that youngsters from the building were sneaking up to the terrace in the night

and getting intimate. They felt that it had to stop. This is where Radhika wondered that when it comes to lovers, how can you put locks on.

Bilkul. She felt that har umr ke pyaar ka ek tareeka hota hai; you can't and you should not bind it. She told me about this incident and it stayed in our mind. Then

after a while, we were traveling to London for a shoot. We were at the Jane Austen museum and she is the woman behind classics like Pride & Prejudice, Sense and

Sensibility etc. For us, she is a pretty much on the lines of Shakespeare. So there we were, inspired by the Mumbai incident and in the Jane Austen environment.

Clubbing these two sensibilities, we had the starting point for Sanam Teri Kasam as there was this fairy tale element to our realistic love story.

So how does this realistic love story play?

Mumbai is a very cosmopolitan city. There are Gujarati people in Vile Parle. Then in Sion there is this big South Indian community. When you go to Five Gardens,

there are Parsis. It is all bracketed into a lot of communities living together. Sanam Teri Kasam is set in King's Circle where a simple traditional South

Indian girl lives. Then she meets this boy who comes from a criminal background. At the age of 14, he had committed a murder. With a dark past to him, it could well

be an improbable love story. Hence, the clash comes in due to different cultures and different strata. It all turns out to be very strange for the lovers.

Moreover, you have absolute newcomers for the lead pair.

That is something making the film look really young. In the past we have worked with superstars like Salman Khan and then Sunny Deol and Kangana Ranaut. However,

when we cracked the story of Sanam Teri Kasam, we knew that it had to be with newcomers. The film is about kids who are 21-22 year old. Unki abhi pyaar ki

umar hai. There is adrenaline flowing in the body. When a girl touches you for the first time, it is a different kind of a sensation. This makes the love story

really special. As directors we have worked with stars and they are available for us. However, we wanted to launch a new boy and girl this time around.

Your last release I Love NY took ages to release though and later Kangana too was unhappy around its delayed release and was not available for promotion.

That must have hurt you and Radhika.

Kangana and we go back three-four years. We signed her before Tanu Weds Manu. We are a family. Yes, a director is like a parent to the film. However, I think

ki har bachche ki ek destiny hoti hai. Kangana had different reasons not to promote the film. Otherwise she and Sunny went ahead and even dubbed it. In fact I

remember Kangana telling us that how she wished I Love NY was her first film. She has always done these offbeat roles whereas our film was a classic love

story. We tried for three years to release this film and never once did we even think of abandoning it. However, as I said, it had its own destiny.

Guess it was destiny that got you the heroine for Sanam Teri Kasam, Mawra Hocane.

Totally. We were shooting in Melbourne and then when we were in Sydney, we happened to meet Mawra's parents. They insisted that we meet her since she was interested

in acting. Ab yeh destiny hi toh hai ki itne samundar paar kar ke hamein hamaari heroine Australia mein mili and that too who has Pakistani origin. It is all so

ironical because she is exactly the girl who could be from Matunga or King's Circle. We had a certain image of a girl in mind and we found her all the way in Sydney.

Then we saw her Pakistani shows and knew there and then that she was the right choice as the leading lady of Sanam Teri Kasam.