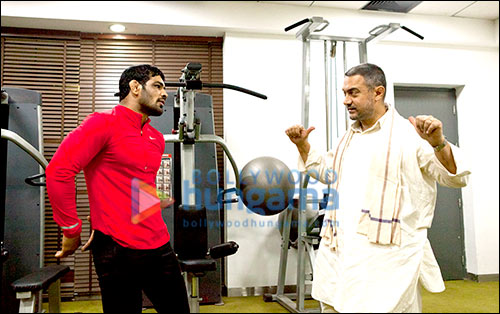 Aamir Khan has his hands full with biopic on wrestler Mahavir Phogat, Dangal. The actor who is undergoing drastic physical training for the film will be seen as a bulky wrestler as well as in a leaner and younger avatar and it is important for Aamir to adapt to these changes without affecting his health. The actor also seems to have received help from yet another prominent wrestler of the country Sushil Kumar for the film.


Whilst it is a known fact that Aamir Khan was shooting for the film in the real locations of Haryana along with the help provided by the Phogat family and Mahavir himself, now we hear that the actor and the crew have moved to Delhi for yet another long schedule. Aamir, who was gearing up for his physical training at Tyagraj Stadium, had a special guest visitor in the form of Sushil Kumar. Sushil Kumar is a freestyle wrestler who is the first Indian to have won Olympics back to back.

Sushil and Aamir not only discussed about the sport at length but Aamir even requested Sushil to show him his workout schedule. Sushil was more than happy to fulfill Aamir's wish and also gave him some tips. After meeting Sushil Kumar, Aamir Khan has set his mind on how he wants to look after losing 25 kgs. He is aiming for a body just like Sushil's.


Dangal which is based on the real life story of the wrestler Mahavir Phogat and his daughters Geeta and Babita Phogat is slated for a Christmas release.