Sara Ali Khan and Kartik Aaryan have been in the news ever since Sara expressed her crush towards the Sonu Ke Titu Ki Sweety actor on Koffee With Karan 6. What followed was the news about the two of them collaborating for the sequel to one of the most romantic films, Love Aaj Kal. Love Aaj Kal 2 has already gone on floor and while earlier too we got a sneak peek into the sets of the film, here’s yet another glimpse that is doing the rounds on the internet. 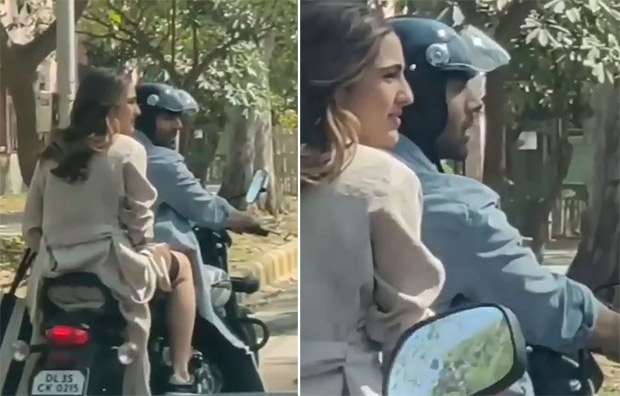 A video of Sara Ali Khan and Kartik Aaryan going on a bike ride, with Sara riding pillion has gone viral on social media. The two of them are currently shooting for the romantic drama in Delhi. The video sees them quite engrossed in the shoot and Sara is seen enjoying the view while Kartik is riding the two-wheeler. Not too long ago, some pictures from the sets of Love Aaj Kal 2 were doing the rounds and fans went quite gaga over the chemistry of the duo. Yet again, fans are quite thrilled to catch this peek-a-boo of the same.

While we can’t deny the fact that there is always ample curiousity around fresh pairing of Bollywood stars, one cannot ignore the fact that Sara’s confession on Koffee With Karan too has fueled quite a bit of speculations about this Jodi coming together.

Directed by Imtiaz Ali, the film is expected to have a new and contemporary take on love and is expected to be quite different from the prequel which interestingly featured Sara’s father Saif Ali Khan alongside Deepika Padukone.