Alia Bhatt and Varun Dhawan are coming together for a mega - period drama, Kalank, helmed by 2 States director, Abhishek Varman. The film began in April this year and they are working non - stop to complete the film. Meanwhile, Alia and Varun are completely enjoying their time together and pulling each other's legs whenever they get a chance while shooting for their fourth film. 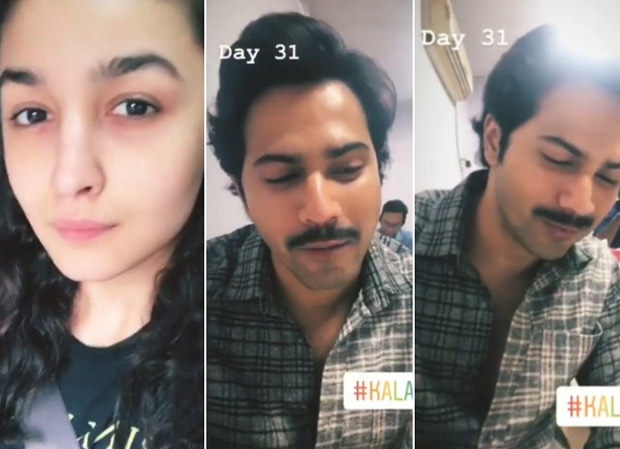 Just a day ago, Varun Dhawan returned to the sets of Kalank sporting his Sui Dhaaga - Made In India look. In the Anushka Sharma starrer film, he has a moustache. He was having lunch and enjoying his meal on Wednesday afternoon when Alia began filming him. Alia seemed to be making fun of him as Varun showed up on the sets of Kalank. She is heard saying, "Look, who's come to visit us on the sets of Kalank. From the Suis and Dhaagas, you have come for the Kalank. What do you have to say, Sir?" Varun was just smiling and enjoying his meal and asking for more curd. These two, adorably called as 'Varia' by fans, can't seem to stop themselves from pulling each other's legs.

On working with Alia Bhatt for the fourth time, Varun had earlier said, “Kalank is very special for Karan’s production house, as it has been in the making since 2004. It was important for us to choose the right film to come back as a pair. People expect a lot from us.”

Kalank marks the fourth collaboration between Alia Bhatt and Varun Dhawan. They made their debut in Dharma Productions’ Student of the Year in 2012. Since then, they have starred in romance dramas- Humpty Sharma Ki Dulhania and Badrinath Ki Dulhania.

Kalank marks the reunion of the 80s on-screen pair Madhuri Dixit and Sanjay Dutt. The other stars include Sonakshi Sinha, Aditya Roy Kapur and Kunal Khemu! The film, which was incepted 15 years ago by Karan Johar and his dad Yash Johar, will release on April 19, 2019.

Also Read: KALANK: Varun Dhawan, Aditya Roy Kapur urge Karan Johar to save them as shooting gets halted due to unexpected rains