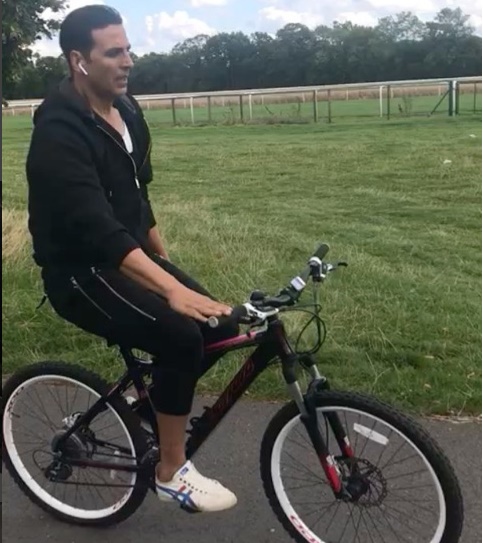 It was Independence Day and all the Bollywood celebs celebrated it in their own unique ways. One of them was the Akshay Kumar who celebrated the day in his own style. Akshay Kumar is currently in England to shoot for his film Gold.

In the end of the video, Akshay Kumar warned his fans to not try this stunt at home or anywhere. He eventually fell off the cycle on the grass while driving his hands-free as a stunt.

On the work front, Akshay Kumar will be seen in 2.0 along with superstar Rajinikanth. The actor has now resumed shooting of Reema Kagti's directorial Gold. The film also marks the debut of TV actress Mouni Roy. Produced by Ritesh Sidhwani and Farhan Akhtar, the film is scheduled to release on August 15, 2018.

Coincidentally shooting today in the same country we got our freedom from...it's a liberating feeling to say the least!#HappyIndependenceDay ???? P.S. Please don't try this stunt at home or anywhere.