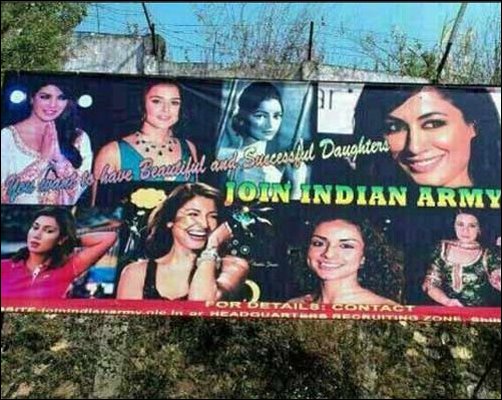 We are sure that the aforementioned headline must have sent your senses for a spin. Well, the impact was the same on many people in Shillong, when they saw this hoarding and that too with the pictures of some of Bollywood's leading actresses on it! To make matters worse, it was none other than certain officials at the Indian Army who were the 'brains' behind this ad!

The ad was basically a call for recruitment drive, which eventually went terribly wrong. To make matters worse, the people (read 'officers') in the recruiting board had not even taken permission from either of the heroines for using their images in the banner that read, 'If you want to have beautiful and successful daughters, join Indian Army'. All of this has resulted in the officers responsible for this being cautioned that any such repetition in the future will only mean serious action from the forces.

The 'ad' became famous in Shillong after many started posting it on the leading social networking websites.