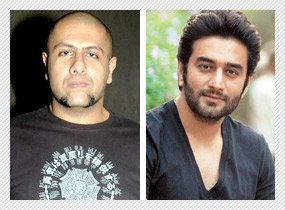 It is their fifteenth year in film music and Vishal Dadlani and Shekhar Ravjiani, besides making it big and sustaining together as Vishal-Shekhar the duo, have also followed their own separate paths.

2012 was a good year for them with Kahaani, Shanghai, Arjun - The Warrior Prince, Student of The Year and their first Marathi film, Balak Palak, whose song 'Haravali Paakhre' has won Shekhar a Best Playback nomination. Individually, Vishal had a very successful singing career under different composers and also continued his work with his band Pentagram, while Shekhar, who also sang in a Hindi film or two, also composed and sang two Marathi singles - 'Saazni' (released) and 'Sanwali' (which will be out soon).

They are proud of their bonding, and have resolved that nothing will come in the way of their friendship. Vishal declares that he is proud of Shekhar's success as a singer in Marathi, and Shekhar says, "In a partnership, the moment the word 'I' comes in before 'We', it is over."

At their studio, the friends get into casual mode for a chat. Excerpts from an interview:

How did the Marathi film Balak Palak happen? Was it because of Riteish Deshmukh, who produced it?

Vishal: We watched the Marathi film Natrang and were blown by the music. Its director Ravi Jadhav has been our friend for a long while, so we told him that we wanted to do something with him, and Riteish came in only later into the project.

Shekhar: Vishal and I have sung a song each in the film. And Ravi heard the melody I had made for what became the song 'Saazni' (sweetheart) and when I asked him to suggest a good Marathi lyricist, he said that he would write the song himself. He has also written my new track 'Sanwali' (the shade).

Vishal: And now, Shekhar has been nominated for Best Male Playback Singer for 'Haravali Paakhre' at Zee Gaurav Puraskar!

Shekhar, you brought in the right Marathi flavour, the perfect diction and an authentic feel. How did you manage all that?

Shekhar: I have been listening to a lot of Marathi music for years. In fact, it shocks me that the Mumbai media does not bother to carry music or film reviews for Marathi movies. For the diction, I took training from my co-singer in 'Saazni' - Bela Shende - and also from Ravi. I used a lot of organic acoustics - like live bass and guitar, and no electronics. It's like this: I asked myself, "When it was that I last composed something for myself?" And the answer was not there! I now plan to do something in Bengali and Tamil as well.


Vishal, you have now got a great career in playback.

Vishal: Well, I have sung a lot since 2012 in particular, and come to think of it, had a good variety under composers like Amit Trivedi ( 'Chhokra Jawaan' / 'Ishaqzaade'), Sachin-Jigar (from 'Shambhu Sutaya' / 'ABCD - Anybody Can Dance' to 'Dil Garden Garden Ho Gaya' from Kyaa Super Kool Hain Hum) and many more like Akaash Vani, Race 2, and Talaash and in our own films. I want to curtail my singing because I seriously think that a voice should not be overexposed. Like we have Udit Narayan sounding so fresh in 'Radha' (Student Of The Year) only because he came in after a gap.

In 'Dil Garden Garden Ho Gaya' you sang in a very gimmicky voice.

Vishal (Laughs): Yes, because producer Ekta Kapoor made me sing in that tone. Sachin-Jigar had made me sing the song straight but Ekta was unhappy and wanted something more stylized and interesting. So I just rendered the song the way she sang it out to us!

Would you guys be open to using other composers too, apart from Shankar Mahadevan - who is as much a singer as composer - whom you have used a lot?

Vishal: Why not? We used Salim Merchant's voice in 'Maa Da Laadla' in Dostana. There was talk during our Sa Re Ga Ma Pa show of using Wajid's vocals, and I am dying to use A.R.Rahman and Vishal Bhardwaj some day.

How do you cast a voice in a song?

Vishal: When we write a song we think of 4 or 5 possible voices for the song.


Shekhar: But after that, we may choose someone totally away from that genre so that the song sounds different and fresh, because people have heard so much of music with a singer who seems suited to a particular kind of song.

Vishal: Today, the age of a singer vis-a-vis the mood of the song and the actor is very relevant. In the old days, music was largely unchanged over the generations and a Kishore Kumar, a Mohammed Rafi and a Lata Mangeshkar could sound nice over multiple generations of artistes. Also, these were great singers who reinvented themselves all the time!


Shekhar: We are therefore also trying out lots of new voices in our films to come.

How do you source your new voices?

Shekhar: Some of them come to us, some are from television, others are people we hear by chance somewhere, like being friends of friends and so on. Some do not even aim to be professional singers.

You guys are back with Rohit Shetty after the first Golmaal film in Chennai Express.

Vishal: But did you know that he has offered us every Golmaal film first before it went elsewhere? As a policy, we work on one film at a time and we do not want to overburden ourselves, so we could not take up the next two parts of that franchise. In fact, it must be historic that our theme song had replayed itself in the next two films with music by Pritam!

Shekhar: For Chennai Express, we are composing a purely South Indian song that is neither a parody nor a stereotype. And there are two songs that we completed from start-to-finish in Chennai to get the authentic feel. The best thing about Rohit is that he has grown so big commercially but remained the same human being.

Which are the other films you are doing now?

Vishal: We have just completed Gippy for Karan Johar. It is amazing that the biggest producer in Hindi films is making a small film about a 14-year-old girl and her growing-up years. In Farah Khan's Happy New Year we are working after a long gap with Irshad Kamil, with whom we had done Shabd and the hit 'Tinka Tinka Zarra Zarra' from Karam besides a song in Anjaana Anjaani. There is also Karan's other film Gori Tere Pyaar Mein with Imran Khan and Kareena Kapoor. And yes, we have just composed the IPL jingle!