Not too long ago, we had reported that Saif Ali Khan along with his Vikram Vedha co-stars Radhika Apte, Satyadeep Mishra, among others visited the sets of The Kapil Sharma Show to promote their forthcoming film. During the same, the actor showed his witty side and left audiences in splits with his one-liners and jokes. Now a conversation from an unseen clip of the episode has found its way online. In the video, the comedian turned host Kapil Sharma had an interesting question for Saif Ali Khan. The comedian turned host quizzed the actor about his non-existence on social media. And knowing the sense of humour of the ‘Nawab’, he also had a quirky response to it. 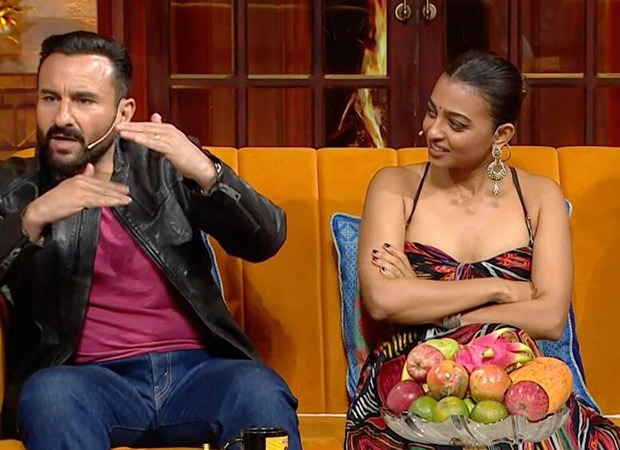 Vikram Vedha actor Saif Ali Khan reveals why he doesn’t have a social media account; says, “Have to lie a lot”

Readers would be aware that Kareena Kapoor Khan and Saif Ali Khan used to stay away from social media. However, while his wife Kareena has given in to the social media temptation, the actor continues to remain aloof from the platform. Quizzing about it, host Kapil Sharma asked, “I’ve not seen any account of yours, though there are many fake accounts under your name. Are you not social, or can you not get a user id?” Saif had a quirky response adding, “I tried joining, but I couldn’t find an ID. My name is Saif Ali Khan, and I tried joining, but there’s already names under that handle…”

When Kapil Sharma spoke about the kind of tension that exists on social media, Saif went on to add, “I feel the same. You’ve to lie a lot.” At this point, Radhika interrupted adding, “He can’t lie at all, that is his best quality.” Saif answered to that too sharing, “No, no, I do lie. But you can get stuck on social media, whether you have to praise this person or that one, I am happy as I am.” Kapil Sharma not only agreed to it but also asserted that he too would be doing so in the future too.

Coming to Vikram Vedha, the film is a Hindi adaptation of the Tamil blockbuster by the same and features Saif Ali Khan alongside Hrithik Roshan. The film released on September 30 during the Navratri festivities.