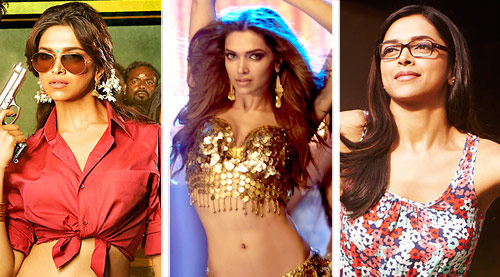 She is the Numero Uno heroine today and no one is debating it anymore. There is no reason for anyone to do that either. After all with multiple hits in a row, Deepika is indeed

on the top of her game. With Bajirao Mastani hitting the bull's eye as well, here is looking at the Top-10 Hits of B-Town's crown holder, Deepika Padukone.

The stakes were really high for her with Chennai Express. However, Deepika scored and how, by delivering an endearing performance as a South Indian girl. Her comic timing was much

appreciated in the film which crossed the double hundred mark. With the Blockbuster success of the film, Deepika truly arrived.

She made a belated appearance in Happy New Year, which was pretty much an all-male affair without her. However, the moment she entered the frame with the chartbuster item number â€˜Lovelyâ€™,

she pretty much owned the screen. The film may not have boasted of an author backed role for her, but her presence certainly ensured that masses were attracted. This was her second hit in a row

As far as testimonials of her finding further recognition were concerned, Yeh Jawaani Hai Deewani was one film that cast her name in stone on its arrival. Despite a low-lying demeanour in

the first half of the film, she brought a spark in the proceedings. Even with a performer like Ranbir Kapoor and his 'Batameez Dil' jig, Deepika made sure that she stood out. The film missed

The film has been a huge success already, and how. As Mastani, she had to step into a part which was envisaged by Sanjay Leela Bhansali more than a decade back. There were many notable and more

experienced actresses who were considered for the part in the years gone by. However, once it fell under Deepikaâ€™s lap, she made sure to come up with an exceptional act. The film is a huge success

and Deepika has a major role to play in that.

It has all been about chemistry, and more of that, in Goliyon Ki Raasleela Ram Leela for Deepika. From Day One of the film's marketing and promotion, it was pretty much a planned campaign

that the talking point of this Sanjay Leela Bhansali film would be the sizzling and unabashed chemistry that Deepika would share with Ranveer. Audience didn't get anything less and embraced the

film with both arms.

Now this is what luck is all about. Deepika stepped into the film, then walked out due to date issues, then walked back in when the makers insisted and eventually managed to score her first 100

crore success! The film may have been all about style and glamour but Deepika showed that even in this zone, there was no one better than her. Her costumes and the bikini act did the trick and the

film was a good success.

Much before the films were being sold as 'Deepika starrers', the tall young woman with dreams in her eyes had a dream start no less with none other than Shah Rukh Khan. The man supported her, the

director (Farah Khan) mentored her and soon, Deepika found herself in the middle of a double role no less. Om Shanti Om, her calling card, was a huge success and went on to fetch a princely

The turnaround began with Cocktail though, the film which found her maximum recognition as a star-actor who could deliver in a complex role. Her part of 'Veronica' was much loved by the

audience while many chartbuster songs in the film did the trick. Her successful run with Saif Ali Khan was further consolidated with this musical romcom that paved the way for four more successes

Meanwhile when chips were not really high for Deepika and she was seeing some flops at the box office, there was some spark in the offering for her with a multistarrer Housefull. The Akshay

Kumar starrer may have boasted of as many as six leads but as Saundarya Bhagayalaxmi Venkateshwari Basapa Rao a.k.a. Sandy, she was as convincing as ever. The film was a good success.

Her pairing with Saif Ali Khan has almost always succeeded and this was evident in Love Aaj Kal where she had a rather complicated role to play. Imtiaz Ali was back in the thick of things

after Jab We Met and the expectations were sky high from Deepika to deliver. She did well too and rest was taken care of the chartbuster music by Pritam. She later returned with Imtiaz for

her next with Ranbir Kapoor, Tamasha.