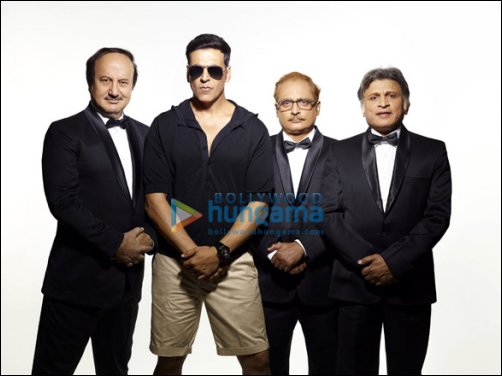 Five days ago, Bollywood Hungama brought you the exclusive first look of the much-awaited comedy, The Shaukeens. Today, we share with you yet another facet of the film that nobody knows -Tigmanshu Dhulia's involvement with the project. The makers had kept this a secret, only to be revealed at the right time - and that's now!


Tigmanshu is the man who has written the new version of the remake of Basu Chatterjee's classic from the 80s. Incidentally, this is also the first time in his career that Tigmanshu has written a film's remake.


Ask Tishu why he made an exception this time around and he says, "I looked upon it as a challenge. The original Shaukeen has been one of my favourite films. It was exciting to adapt it to present times, especially with such an accomplished ensemble of actors", he says.


Akshay himself was thrilled when he heard that Tigmanshu was scripting the film. "I have always admired his work over the years", he states. "It was exciting to collaborate with someone like him."Â


Director Abhishek Sharma who earlier directed the much-acclaimed Tere Bin Laden says he and Dhulia share things in common. "He was my senior at the National School of Drama so I could relate perfectly to his scenes and humour. This script presents a completely different side of Tishu and I am so thankful to him."


The producers of the film, Murad Khetani and Ashwin Varde, believe there was a reason why they chose Tigmanshu. "The Shaukeens is a naughty comedy. It needed to be handled with maturity and the right sensibility. And we must say that Tishu presented us with the best joy ride we could've asked for."