Often times, it so happens when two celebrities end up in the same outfits. But, it doesn't have to always be "who wore it the best" or a "fashion face-off". We can simply appreciate that both celebrities are looking absolutely stunning in their own way. Recently, Bollywood Hungama came across popular Korean actress Lee Ji Ah's Instagram account where she was wearing a stunning gown which we had earlier seen on Bollywood actress Alia Bhatt. 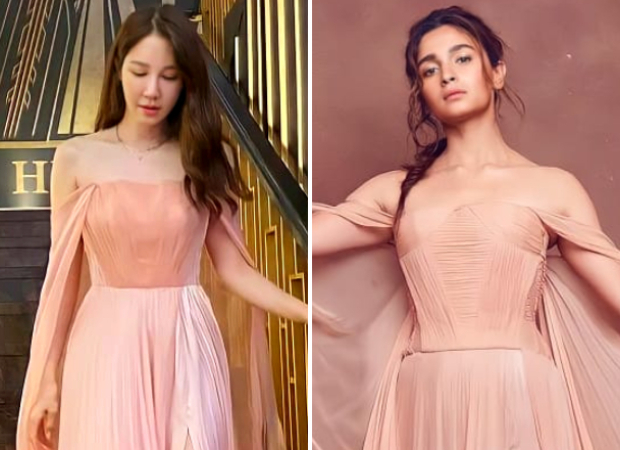 Back in 2019, Alia Bhatt attended the IIFA Awards (International Indian Film Academy Awards) in a stunning peach strapless gown by Georges Chakra. For the awards night, the actress let the outfit do the talking and kept a messy fishtail braid with nude makeup and excess highlighter. Alia opted no accessories and well, she looked stunning.

Korean actress Le Ji Ah, who is currently starring in The Penthouse - War In Life that's been raking strong viewership, was seen wearing the same peach gown in the first episode of the first season which premiered on October 26, 2020. It was her introduction scene and she also wore the same in the flashback scenes in season 2 as well (a twist for the viewers for sure) but the first episode clearly gives a glimpse of her outfit. She kept her hair straight, accessorized with a simple pendant, minimal makeup, and no excess jewellery. She wore shimmery pumps,  The actress had shared pictures on her Instagram, and rest assured, she looked elegant for sure.

The Penthouse - War In Life is over a top drama that truly leaves you surprised with the twisted storylines and cliffhangers. It is par excellence showcasing the lives of uber-rich residents of Hera Palace, a luxury penthouse apartment with 100 floors, who have a lot of secrets and hidden ambitions. The dialogue delivery, the melodramatic moments will remind you of old-school shows. It is a huge hit already raking in huge viewership. While it is still on the air, it has received a rare two-season renewal. It stars Lee Ji Ah, Kim So Yeon, Eugene, Uhm Ki Joon, Park Eun Seok, and Yoon Jong Hoon among others. The second season wrapped up on April 2, 2021, and the third season is in production.

Both Alia Bhatt and Lee Ji Ah made a statement in the minimal gown and showed how to style the identical outfits in different ways.