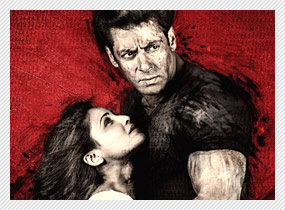 1. This is Salman Khan's first release in 16 months. Need anything more be said? The audience is one collective bhookha sher.

Ten facts you should know about Jai Ho

3. For the first time, Salman plays a social crusader with a bleeding conscience who can't watch the poor and the under-privileged being ill-treated.

4. The film is a remake of the Telugu blockbuster Stalin which starred Chiranjeevi. Salman is very close to Chiranjeevi and his son Ramcharan. Jai Ho is being screened for the father-son duo.

5. Tabu who plays Salman's sister has been in three other films with Salman....Biwi No 1, Hum Saath Saath Hai and Jeet. But she has never been paired with Salman as a romantic lead.

6. The title Jai Ho was suggested by Salman and Sohail's father Salim Khan, as Salman's name in the film is Jai Agnihotri. The surname is taken from Salman's brother-in-law Atul Agnihotri.

7. The leading lady Daisy Shah has no experience in acting. Apparently, her only qualification to do the role is her proficiency in the Gujarati language.

8. Two of the actors in the huge cast of Jai Ho are Salman's discovery from Bigg Boss. They are Santosh Shukla and Sana Khan.

10. The inspiration for the film's sprawling family cast is Sooraj Barjatya.