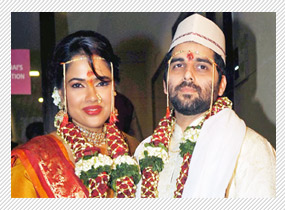 The pretty and genial actress Sameera Reddy is now Mrs. Akshai Varde. The marriage was so sudden that not even her closest friends were aware of her plans.


A day after the wedding which was held on January 21, Sameera sounds like the typical radiant bride.


Explaining her sudden decision to tie the knot, Sameera says, "But isn't this the best way to do it? Months of painful planning causes so much stress for the parents. The couple itself is in agony over every issue from clothes to guests to their future together. Akshai and I were supposed to marry in April. But then we decided to take the plunge right away. My sister Meghna was down from abroad with her baby and so was Akshai's sister. They both felt it'd be impossible for them to travel down to India again in April. Besides, the pundits kept saying Jan 21 was an exceptionally auspicious day. Akshai said, why not....I said, why not? (Laughs). And we said, 'I Do.' And I am glad we did."


Sameera says it was a perfect wedding with just close family and friends. "It was all because of my sister Sushma who arranged everything in just 10 days. She was like the CEO of the wedding. Neeta Lulla was asked to get me either a traditional Maharashtrian or South Indian saree with no accessories and jewellery. I had spent 11 years of my life decking up on screen. For my wedding I wanted a minimalist look. We finally opted for simple South Indian saree. I guess that was the 'Reddy' side of asserting itself."


Sameera and Akshai are both Maharashtrian Brahmins. They both share a penchant for mo'bikes. "Akshai has his own range of mo'bikes. That's how we met. I love mo'bikes and riding them is my passion. Akshai saw me whizzing past on this really mean macho machine. I think he was impressed by my love for mo'bikes. Our relationship started there. We've known one another for years. Akshai is well-known in his own field but not part of showbiz. I think that was very important for me. I wanted to marry outside the film industry."


Sameera says the wedding was planned and executed without any hitch. "My only pre-condition was that we should exchange wedding vows silhouetted by the sunset. Now where to find the sunset in Mumbai? My sister Sushma was going mad until she suggested the terrace of my own apartment. That's where we exchanged wedding vows at exactly 6.30 pm."


No showbiz celebrities were at Sameera's wedding and that's the way she wanted it. "Only Vijay Mallya who is very related from my mother's side gave me away to the groom. That apart there were only friends and family."


The bride feels the wedding was perfect in every detail. The honeymoon would have to be postponed. "Akshai has to attend to an auto-expo in February. After that we'll go on our honeymoon and it would be a biking trip....what else?! At the moment I am just basking in the feeling of being Mrs. Akshai Varde. You know, at the post-wedding dinner my shy husband took the guitar and sang an Eric Clapton song for me. The moment was magical. I wanted to hold on to that moment for a lifetime."


Wishing Sameera many such golden moments in the years to come.

Katrina Kaif makes a chic statement in these…