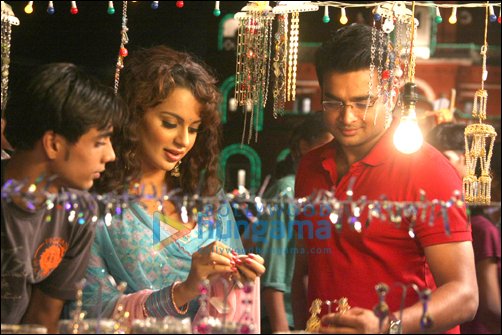 One promo that has become quite the talk of the town these days is that of Madhavan-Kangna starrer Tanu Weds Manu. While the title of the film itself is quite catchy, what many don't know is the fact that it took a while before the makers could zero in on the same.

The fact is that the film was earlier titled Manu Weds Tanu as the director Anand Rai felt that to be the appropriate title. However, Kangna who plays the character of Tanu in the film insisted that the title should be Tanu Weds Manu and not Manu Weds Tanu as the tale and narrative unfolds from Tanu's point of view. Kangna's reasoned that her character Tanu (a small town, wild girl) is the one in the commanding position throughout the film as compared to Maddy's character Manu (a simple NRI boy).

The director was highly flummoxed by this suggestion; he did not know how to handle it. He was also a bit apprehensive about how Madhavan would take the suggestion. However, when he spoke to Maddy, the actor readily agreed with Kangna's suggestion and was perfectly fine with the film being called Tanu Weds Manu.


Says director Anand Rai "It's true that the film was earlier titled Manu Weds Tanu. However, we felt that Tanu Weds Manu was a more suitable title, according to the demands of the script. So we decided to go with Tanu Weds Manu."

R Madhavan reveals the looks of the roles…

R Madhavan clarifies rumours around him…