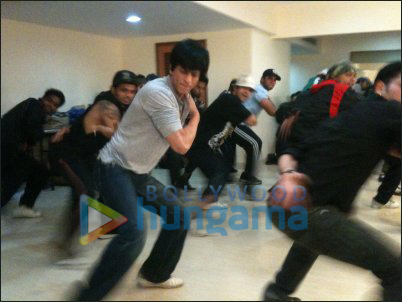 In a few hours from now, we would be bidding 2010 Goodbye and welcoming 2011. The year 2011 promises to be a big year for Bollywood with a lot of big films slated for release. However, one of the most awaited films of 2011 is none other than Ra.One starring Shah Rukh Khan, Kareena Kapoor and Arjun Rampal.

Ever since this sci-fi film was announced, it has generated tremendous buzz. Director Anubhav Sinha and his team have been working round the clock to ensure that they have a high quality product. SRK in fact recently shot for a couple of songs for the film in Mumbai along with his co-star Kareena Kapoor. Director Anubhav Sinha posted this pic of the superstar rehearsing his dance steps on Twitter. Says Anubhav excitedly, "I know, I know... what you want. Here is the man himself, rehearsing for the song... Exclusively for my twitter friends..."

Anubhav is also planning to reveal the first look of G.One (the character played by SRK) in a few days from now. With such tremendous buzz surrounding Ra.One, one can surely expect the film to take a bumper opening when it releases in the latter half of 2011.