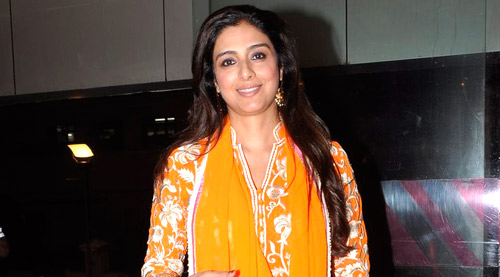 Promo of Talvar has been unveiled and while one gains an impression of a hard hitting narrative in the offering, there is a not-so-pleasant surprise in the store. Tabu, who was brought on board by director Meghna Gulzar and producer Vishal Bhardwaj, is entirely missing from the promo.

"Now that's baffling because it is not just a quick teaser but a full-fledged theatrical promo," comments an observer. "With the kind of clout that Tabu enjoys, one wonders why her presence won't be used to further promote the film and build hype around it. Also, it isn't as if her presence was meant to be kept as a secret. It was always a known fact that she is featuring in the film."

As a matter of fact, this is second consecutive film of Vishal Bhardwaj where he is bringing his Maqbool leading lady is on the big screen. Last year for Haider, Vishal had given her a pivotal part to play, that of Shahid Kapoor's mother and now in Talvar, she is in a key role as well. Since the film is based on the Aarushi Talwar murder case, actors were chosen with utmost care since Vishal and Meghna didn't want to compromise with the sensitivity of one of the most heart-wrenching unsolved mysteries in the modern times.

"Contrary to perception though, Tabu is not playing mother of the murdered teenager. That part is played by Konkona Sen Sharma," adds a source, "Instead, Tabu is playing the part of another woman in the film, who is also a key element in the story. That said, hers is a special appearance in Talvar and the makers felt that it would be best suited for the film if Tabu's part is kept as a surprise element."

This means that while Irrfan Khan (who plays an investigation officer) and Neeraj Kabi & Konkona Sen Sharma (who play the parents) are present right through the promo and leave a fantastic impression, Tabu's part would be known only once the film releases on October 2.

When contacted, Meghna said, "Tabu is not in the promo because it would be misleading to do so. The stories of the film and its casting that had been doing the rounds were neither given by us nor corroborated by us. Since the film is in a sensitive space, we have spoken about the film only now through its promo."

As for the eventual presence of Tabu, who was the leading lady of her debut directorial affair Filhaal, Meghna just smiled away, "Let's just say she is the 'lucky charm'."

We would like to see how this charm plays on the big screen now.