Actors Taapsee Pannu and Pratik Gandhi will be seen together for the first time in the film Woh Ladki Hai Kahaan? The first look of the film featuring the two actors was unveiled a couple of days ago. Taapsee will be seen playing a feisty cop, while Pratik will be seen as the young newly wedding scion of a Masala magnate family. 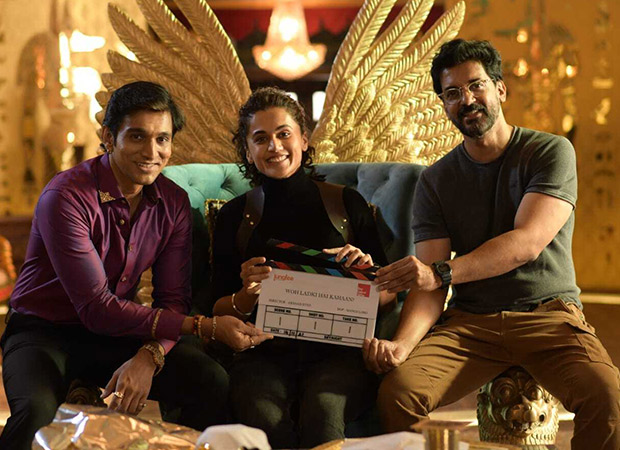 The film is being jointly backed by Junglee Pictures and Roy Kapur Films. The makers on Wednesday shared a picture from the sets of the film in Jaipur. In the picture, Taapsee is seen dressed casually while Pratik is seen in a purple satin shirt. Writer and director Arshad Syed is also seen in the picture. The team seems to be shooting in a palatial house in Jaipur.

Roy Kapur Films shared the picture on their official social media handle and wrote, "She is feisty as ever, he is bratty as ever! Here's a glimpse straight from the sets of #WohLadkiHaiKahaan? in Jaipur."

On playing a cop for the first time and sharing her stunning look from the film, Taapsee Pannu said, "Playing a policewoman and doing a comedy film has always been on my checklist and I am happy that it is finally ticked off. I had seen Pratik's work and I think he is a very talented actor and I am absolutely enjoying working with him. Arshad has written an amazing script with great comic quirks and also a lot of heart, which I am looking forward to. I am happy that Junglee Pictures and Roy Kapur Films have collaborated to produce this film. It's going to be a fun ride!"

As for Pratik, talking about his role, he said, “My character in Woh Ladki Hai Kahaan? is very different from anything I have ever done before, and that is very exciting. Taapsee is super talented and I am so thrilled to be working with her. Arshad has a great vision and he has written the story with so much nuance! I am sure the audiences will love it.”