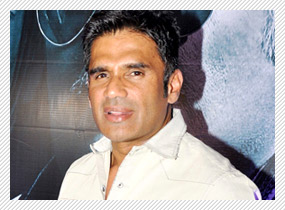 Over the last few years, Suniel Shetty has gone ultra choosy when it comes to his film assignments. Barring a cameo in Jai Ho earlier this year, Shetty has been more or less absent from the Bollywood scene. Not quite happy with some inconsequential roles/films coming his way, the man - who has over 100 films to his credit during last couple of decades - decided to go slow rather than adding anything to his profile which he would regret later.

However, he truly believes that there is always a second innings for an action hero if he chooses to reinvent. This is what he is promising to do with Koyelaanchal, a film where he is enacting the character of an IAS officer in as humane a manner as possible without getting into kicks and punches, something which is associated with a Suniel Shetty affair.

"That's the beauty of the film. It's the mind game which is coming into play here and the drama is primarily made of the sheer look and the dialogues that would send shivers to anybody's spine," says Suniel in a genuinely excited tone, "The way Asshu (Trikha) has handled his key characters (other being Vinod Khanna, who is playing a coal mafia don) is brilliant. Focus is not on my muscles but the mind. The way my character is required to use sheer power of his brain to bring this man down is quite engaging. Also, the way Koyelaanchal shows the nexus of politicians and mafia even after nationalization of coal is wonderful."

This isn't the first time that Suniel is collaborating with Asshu. Last year, they had come together in ill fated Enemmy which had also starred the father-son pair of Mithun Chakbarorty and Mahakshay. The film failed miserably at the box office, courtesy zero promotion, marketing and haphazard release. Still, in an industry where it is the last film which decides the fortunes for those associated with it, what made a particularly choosy Suniel to join hands with Asshu again?

"I believe in the way Asshu works and as for success, then well I think it is just luck," says Suniel, "Perhaps if Enemmy did not have Mithun or me and may have featured some other saleable stars, then maybe it would have been more marketable. I think the film would have done well then as Asshu's work was great in there."

He refuses to attribute the film's commercial failure to Asshu.

"Why blame Asshu? For that matter, he could blame me as well! Even I haven't had success of late that is worth talking about. But then I am not hanging up my boots. I know for sure that as an action hero, there is always a chance for a second innings. I am most certainly not done yet," says Suniel.