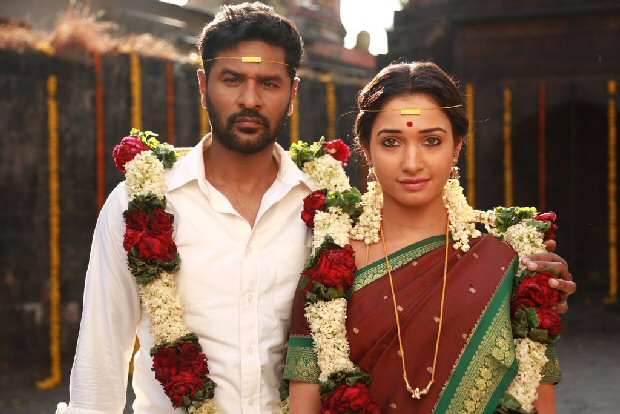 In the land of the bland, where Mehra’s masterly Mirzya co-exists with Mira’s moving Queen Of Katya, there is room for everything including potty humour masquerading as weekend satire.

It takes all sorts. Tutak Tutak Tutiya (hence forth refers to as T3) proves it. This 2-hour ordeal is designed as a grand farce where everyone gets to have a wish come true. Prabhu Dheva, who can’t act, gets to try out his doddering comic timing in scenes that are written in mock-horrific loops. And Goodness, what is that thick Tamilian accent doing in the Hindi version of a film that has a Telugu and Tamil version?

Farah Khan, who thinks she can act, gets to play dance-show judge. It’s like Arnab Goswami playing a new anchor.

Then, there is Sonu Sood who gets to play, heh heh, ‘Superstar Raj Khanna’. When we were you we used to tie a towel on our backs and pretend to be Superman. Just goes to prove, if you are a producer, you can make all your dreams come true. And never mind if your dreams are the audiences’ nightmare. This is a film that will give you sleepless nights for days to come… That’s after you come out of a daze brought on by Tamannaah as she transforms from a devoted domesticated housewife into a slithering hip-shaking lip-pouting diva star as Ruby.

Please note. Good girls wear sarees, stay at home to look after their husband’s home, while he goes out to flirt with women in skirts pretending to be bachelor. Tamannah, who is a competent performer, goes from dazed housewife to dazzling film star with as much enthusiasm as a cook moving from brinjal curry to dahi vada.

For some strange reason, she is repeatedly shown in a state of just-had-bath with a towel tied around her hair. Please note: devoted house wives travel extensively from bath to kitchen, sometimes to the, ahem, bedroom. In this case, since the husband is the emphatically asexual Prabhu Dheva, the couple never goes to the bedroom.

Prabhu Dheva, who is a devastating dancer, is here cast as an oafish selfish uncaring husband. He is an officegoer who gives his bio-data to every single girl hoping she would become his girlfriend. The man is a borderline stalker in this monstrously improper comedy-horror. Prabhu Dheva is shown bullying slapping heckling and haranguing women including his wife. It’s a bloody embarrassment for the actor and he looks as though he was being forced to keep a dentist’s appointment which he would rather skip.

A broad crass comedy may work if the actors believe in the material, no matter how outrageous it may be. Here in T3, the performers go through the motions as though stuck in the loo with constipation. The odds of their conquering the inertia that is so clearly mapped on their faces remains at the most, bleak.

There is very little in this film to brighten up the proceedings. Unless those rumbustious Bhangra numbers put a beat in your feet. Two of them feature Esha Gupta and Amy Jackson. But don’t get your hopes too high. Amy doesn’t even dance. She just stands around looking bored watching others shake a leg. This was where I could identify with a character’s emotion. Ennui in the face of strenuous farce.

Stay away from this dead meat posing as freshly baked barbecue. Revenge they say is best served cold. T3 serves it piping hot. We, and poor Prabhu Dheva, must have done something terribly wrong to deserve this.

A fan asks Sonu Sood to drop him to…